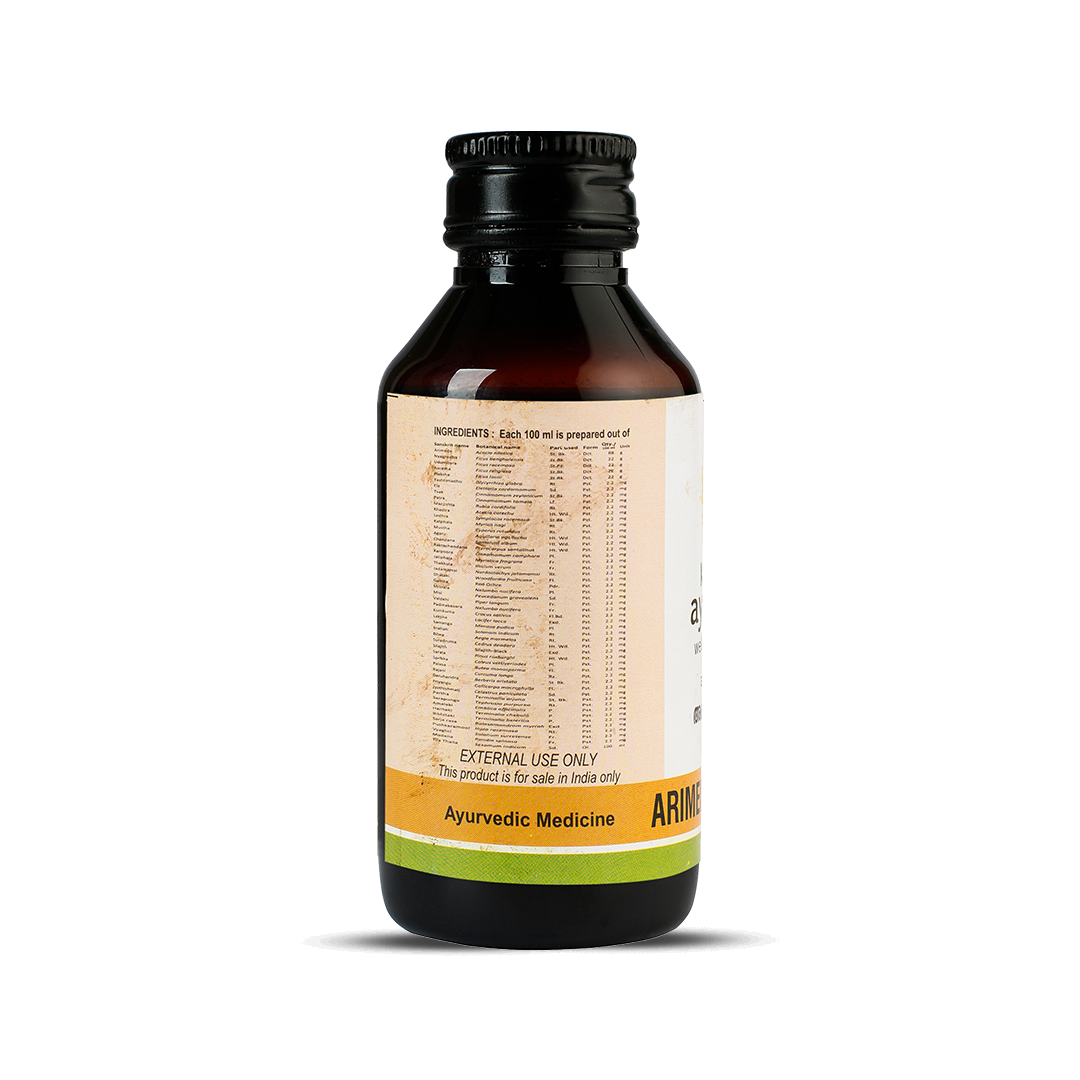 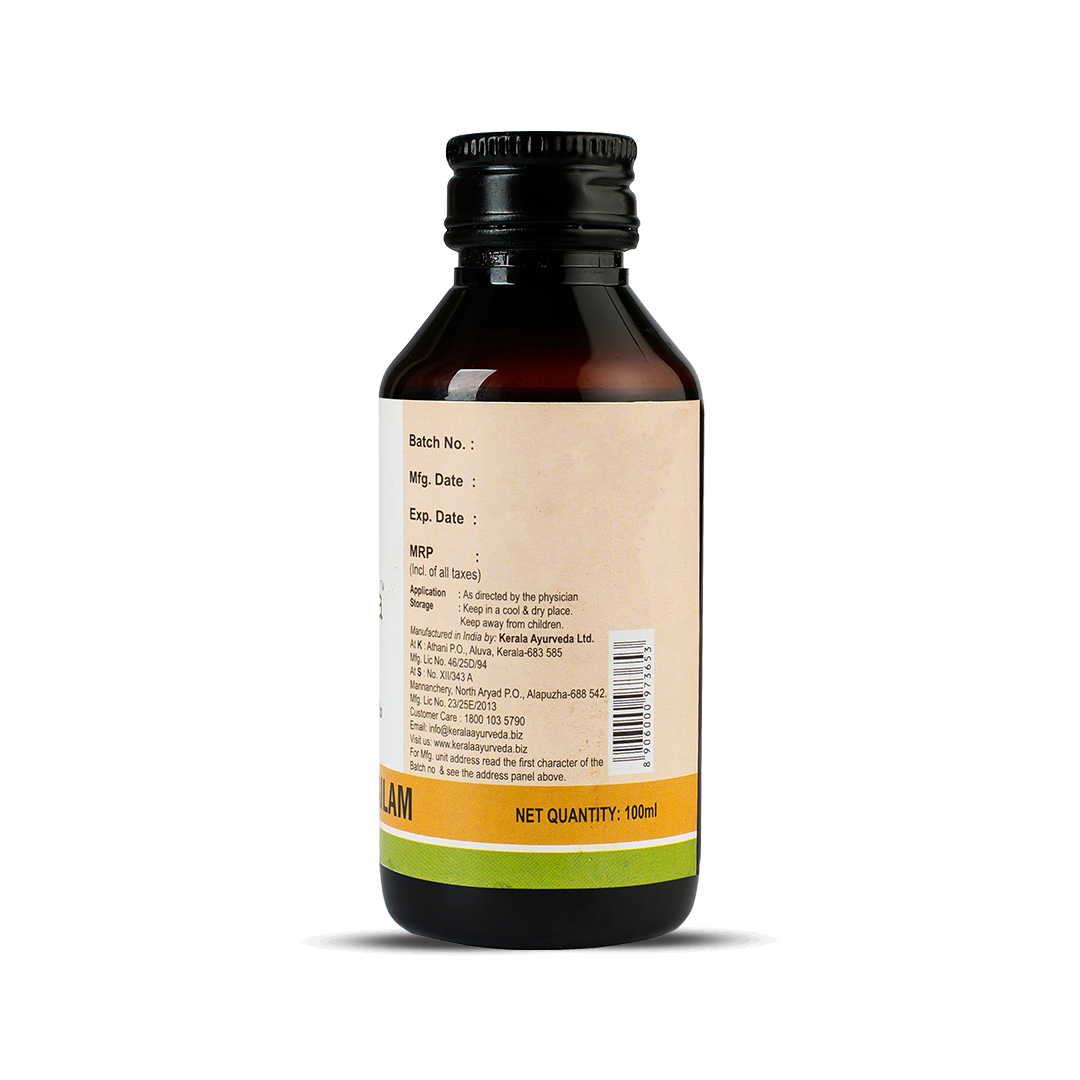 Kerala Ayurveda's Arimedadi Thailam is an Ayurvedic medicine for teeth and gums and is one of the products to use in oil pulling, irrespective of prakriti or doshic imbalances. When Vata Dosha is in excess, especially with typical Vata issues like toothache, the oil mixed with warm water before swishing in the mouth.

Gargling and oil pulling with Arimedadi Thailam aids in the healing of over 30 systemic diseases ranging from headaches and migraines to tooth sensitivity. It also helps prevent tooth decay and relieve bad breath, bleeding gums, chronic dry throat and cracked and lips. Overall, it strengthens teeth, gums and jaw muscles.

Some benefits of using Arimedadi Thailam are:

Dental and oral health is an essential part and a key indicator of overall health, wellbeing, and quality of life. Good dental or oral care is important in maintaining healthy teeth and gums, and tongue. The mouth teems with bacteria which are mostly harmless, but it is the entry point to the digestive and respiratory tracts, and some of these bacteria can cause disease. Normally the body's natural defences and good oral health care keep the bacteria under control. However, without proper oral hygiene, bacteria can reach levels that might lead to oral infections, such as tooth decay and gum disease.

Causes of dental and oral diseases

There are many factors that contribute to gingivitis and periodontitis, including:

Ayurveda is the ancient Indian system of health-care and longevity. It involves a holistic view of an individual, their health and illness. This 5000-year-old system of medicine recommends treatments with specific herbs and minerals to cure various diseases. The botanicals in the Ayurvedic material medica have been proven to be safe and effective, through several hundred to several thousand years of use.

Ayurveda defines health as the equilibrium of the three biological humors (doshas), the seven body tissues (dhatus), proper digestion and a state of pleasure or happiness of the soul, senses and the mind. A balance among the three doshas is necessary for health. Together, the three doshas govern all metabolic activities.

According to the Shalyatantra and Shalakyatantra (one of the branches of Ayurveda), 65 varieties of oral diseases can arise in seven anatomic locations-eight on the lips, 15 on the alveolar margin, eight in connection with the teeth, five on the tongue, nine on the palate, 17 in the oropharynx and three in a generalized form.

For the treatment of these diseases, Ayurveda advocates procedures such as oral cleansing, extractions, excisions, flap surgeries and others. Along with the treatment of orofacial diseases, Ayurveda recommends a few daily use therapeutic procedures for the prevention of and maintenance of oral health. These include Dant Dhavani (Brushing), Jivha Lekhana (Tongue scraping), Gandoosha (swishing or oil pulling) and tissue regeneration therapies.

According to Ayurvedic principles, oil pulling or swishing purifies the entire system because each section of the tongue is connected to a different organ: the kidneys, lungs, liver, heart, small intestine, stomach, colon and even the spine. Oil pulling activates the salivary enzymes that absorb the chemical, bacterial and environmental toxins from the blood that come out through the tongue.