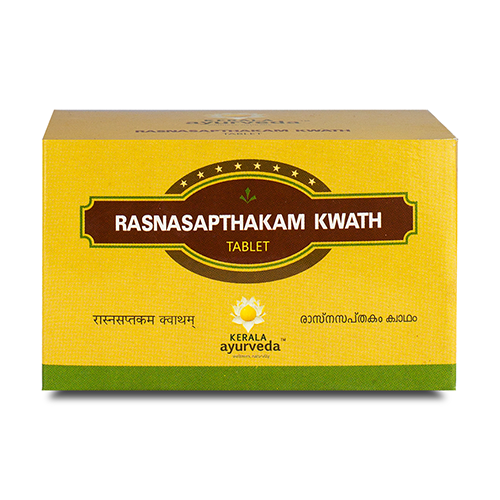 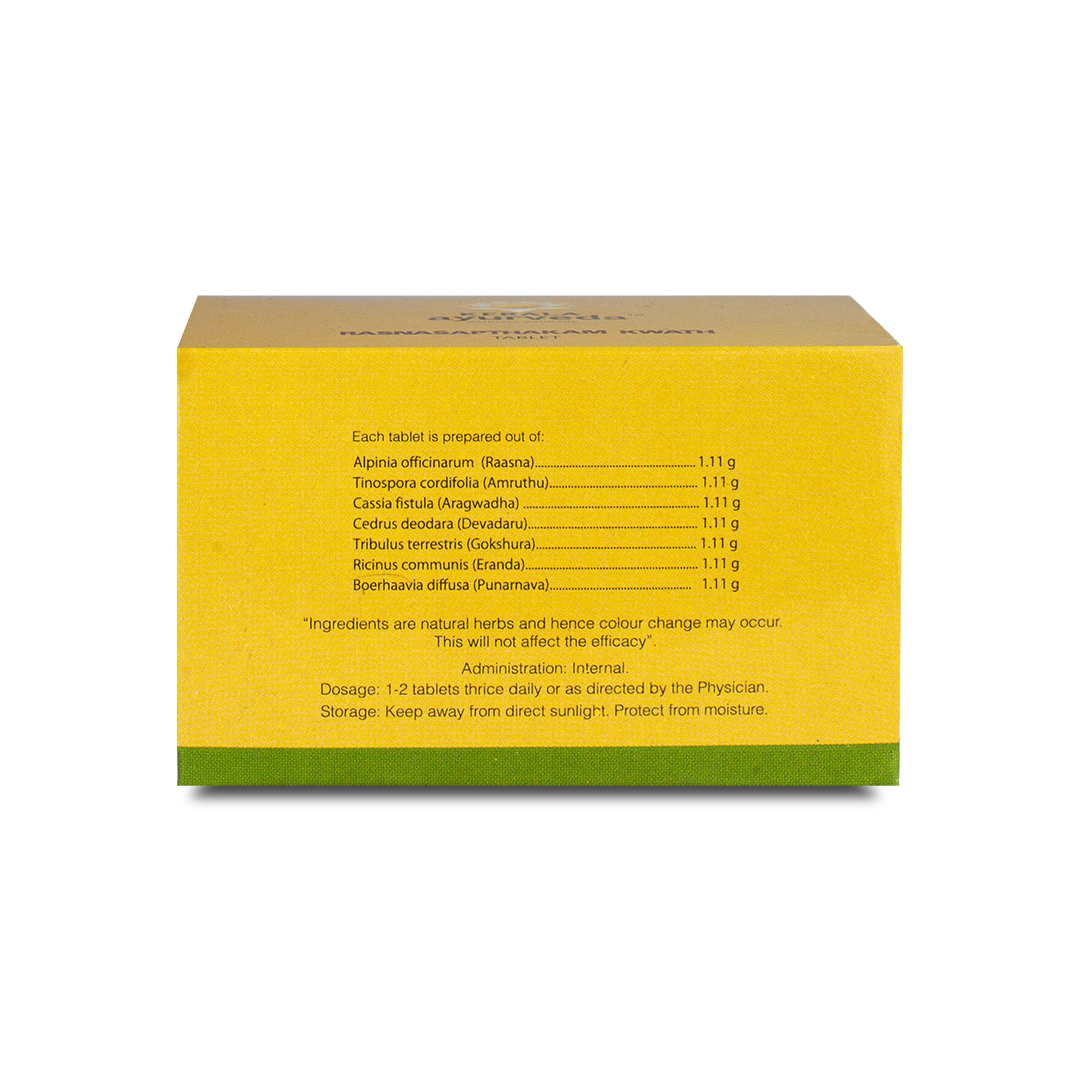 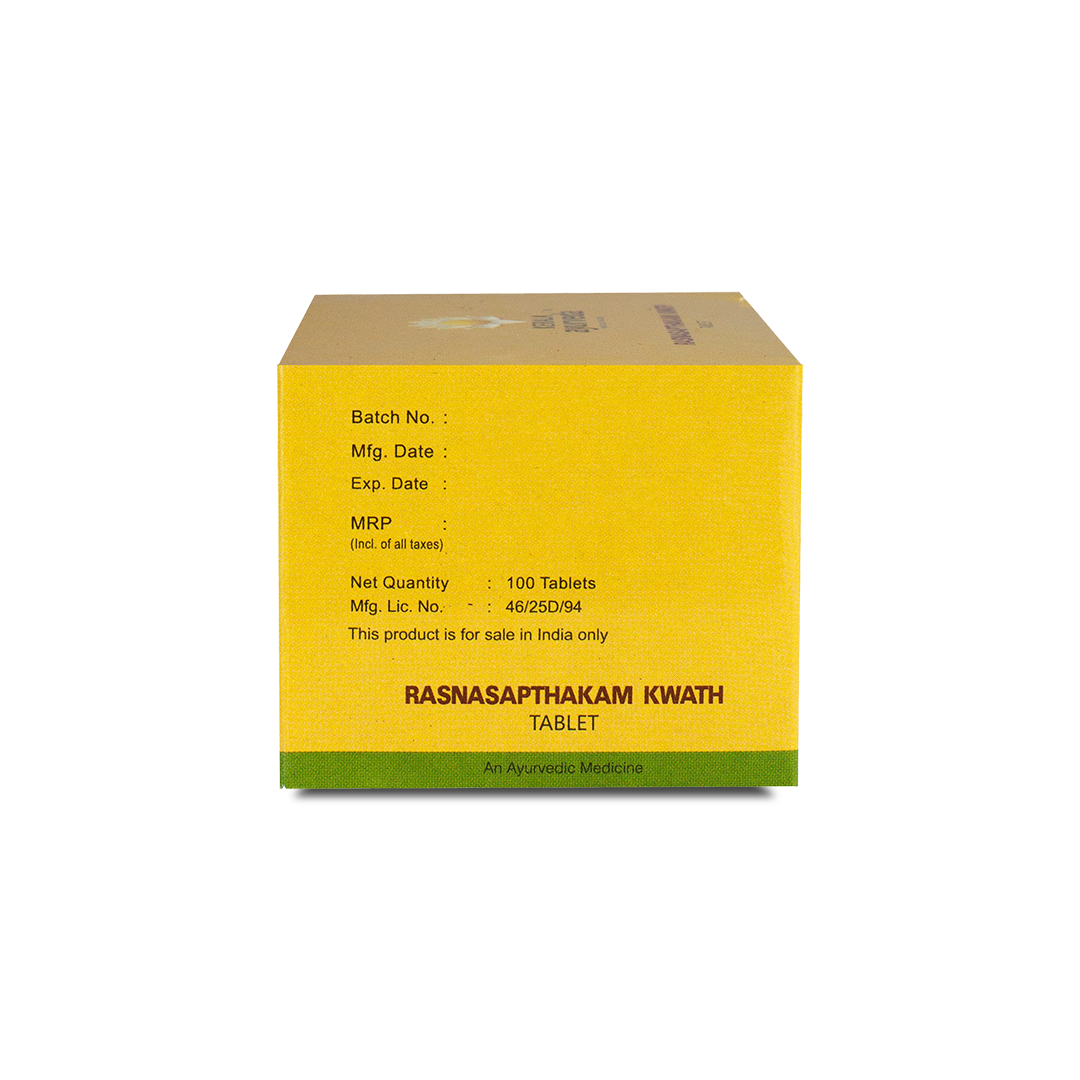 Rasnasaptakam Kwath is a tablet prepared out of herbal ingredients, which consist of water-soluble active principles. It contains Rasna and the other seven ingredients and hence named Rasnasapthakam Kwath. It is available as a dry coarse herb mixture, ready-made preparation and tablet.

Kerala Ayurveda's Rasnasapthakam Kwath Tablet is said to be beneficial in treating joint disorders and this ayurvedic antiinflammatory medicine for pain is also an anti-inflammatory and analgesic.

Inflammation refers to the body’s process of fighting against things that harm it, such as infections, injuries, and toxins, in an attempt to heal itself. When something threatens to damage the cells, the body releases chemicals that trigger a response from the immune system, and inflammation is part of that immune response. It is a process that depends both on the physical actions of white blood cells and the chemicals that they produce: antibodies, cytokines, and the like. This response includes the release of antibodies and proteins, as well as increased blood flow to the damaged area.

Chronic inflammation is a slower and generally less severe form of inflammation. It typically lasts longer than six weeks and can occur even when there’s no injury, and it doesn’t always end when the illness or injury is healed. Chronic inflammation has been linked to autoimmune disorders and even prolonged stress.

Examples of conditions that cause chronic inflammation include:

Inflammation is a defense mechanism in the body so when the immune system recognizes damaged cells, irritants, and pathogens, it begins the healing process. When something harmful or irritating affects a part of the body, there is a biological response to try to eliminate the foreign body.

There are many factors that can lead to inflammation, including:

There are also certain types of foods that can cause or worsen inflammation in people with autoimmune disorders. These foods include sugar, refined carbohydrates, alcohol, processed meats, and trans fats.

When inflammation occurs, chemicals from the body's white blood cells are released into the blood or affected tissues to protect the body from foreign substances. This release of chemicals increases the blood flow to the area of injury or infection and may result in redness and warmth. Some of the chemicals cause a leak of fluid into the tissues, resulting in swelling. This protective process may stimulate nerves and cause pain. The increased number of cells and inflammatory substances within the joint cause irritation, swelling of the joint lining and, eventually, wearing down of cartilage.

Ayurveda means 'The Science of Life'. Ayurvedic knowledge originated in India more than 5,000 years ago stemming from the ancient Vedic culture. It was taught for many thousands of years in an oral tradition from accomplished masters to their disciples. Ayurveda identifies three basic types of energy or functional principles that are present in everyone and everything -  vata, pitta and kapha. These principles can be related to the basic biology of the body. The cause of disease in Ayurveda is viewed as a lack of proper cellular function due to an excess or deficiency of vata, pitta or kapha. The disease can also be caused by the presence of toxins, known in Ayurvedic science as 'ama'.

In Ayurveda, the goal is to find the underlying source of a symptom and not only to treat the symptom itself. Inflammation can be due to any number of triggers from stress and trauma, the quality and choice of foods one eats, water intake, lifestyle and emotional state as well as sleep and exercise routine. Agni or the digestive fire is one of the principal forces in Ayurveda and it is an essential ingredient to good health. In the form of metabolism, it digests the food, generates life-sustaining energy, and incinerates waste. But when the metabolic fire burns too hot or flares up in the wrong places, it leads to chronic inflammation, and a host of other disorders arise.

According to Ayurvedic understanding, health is based on the balance of an individual's physiology (Doshas), digestive processes (Agni), tissues (Dhatus) and excretion (Malas). A person who knows how to balance their mind, body, and consciousness and maintain a state of balance is content and considered to be healthy. The Ayurvedic approach seeks to restore physical, mental, emotional, and spiritual balance, by using nutrition, yoga, meditation, breathing exercises, herbs, and supplements.