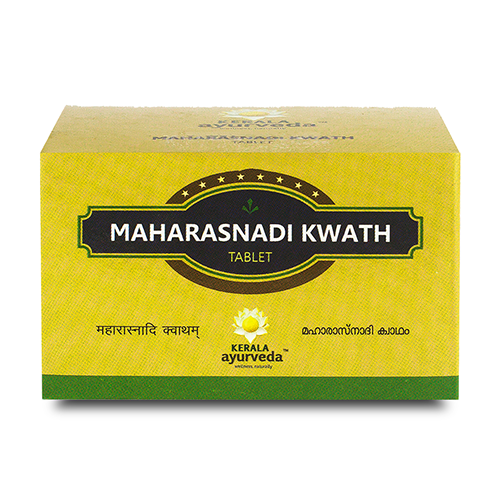 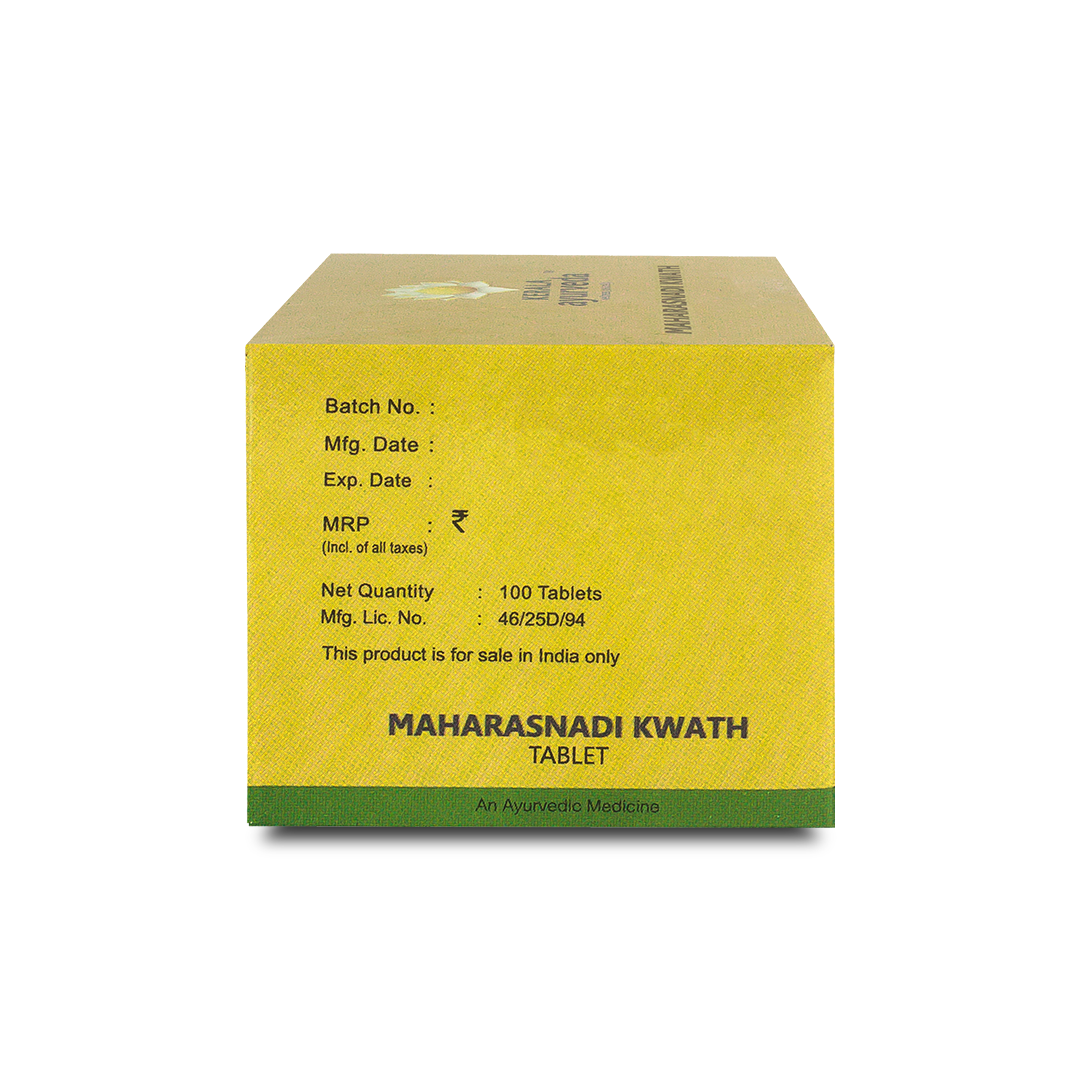 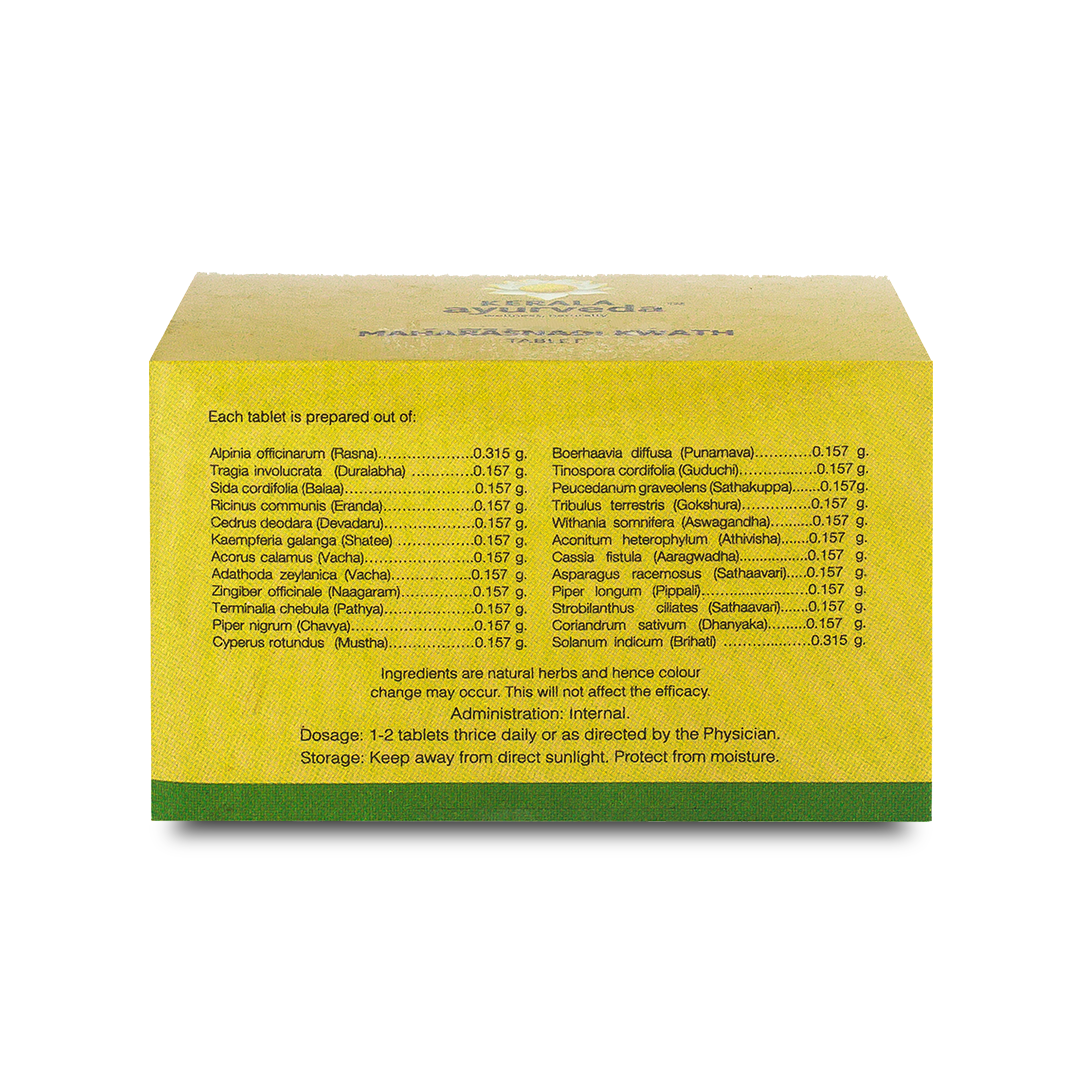 According to Ayurveda, Sciatica, Frozen shoulder, hemiplegia and spondylosis are usually caused by an increase or aggravation of ‘Vata dosha’. Maharasnadi Kawath is an ayurvedic formulation possessing anti-inflammatory benefits. It is a classical ayurvedic medicine and formulation and it is used to assist in Vata disorders like Kampavata (Parkinson’s disease), hemiplegia, paraplegia, Neck pain, low back pain, rheumatoid arthritis, osteoarthritis, bloating disorder, knee pain, hip pain.

Maharasanadi Kwath is known as an age-old Ayurvedic formulation that is helpful in managing and relieving joint and muscle pains, inflammation and stiffness. It is made from naturally derived ingredients and therefore has no side effects. It is a classical ayurvedic medicine and Maharasnadi Kadha uses key ingredients that are known to help in the treatment of Vata disorders like Kampavata (Parkinson’s disease), hemiplegia, paraplegia, neck pain, low back pain, rheumatoid arthritis, osteoarthritis, bloating disorder, knee pain, hip pain.

1 to 2 tablets thrice daily or as directed by a qualified Physician.

Inflammation primarily causes pain because the swelling pushes against the sensitive nerve endings. This sends pain signals to the brain. Other biochemical processes also occur during inflammation; they affect how nerves behave, and this can enhance pain. Inflammation is a defence mechanism in the body. The immune system recognizes damaged cells, irritants, and pathogens, and it begins the healing process.

Frozen shoulder is the result of inflammation, scarring, thickening, and shrinkage of the capsule that surrounds the normal shoulder joint. Any shoulder injury can lead to a frozen shoulder, including tendinitis, bursitis, and rotator cuff injury. Sometimes you only notice a frozen shoulder when it begins to hurt and the pain then causes you to limit your movement which in turn increases its stiffness. Movement becomes limited and when it’s severe, using your shoulder for daily tasks become near impossible.

Sciatica refers to pain that radiates along the path of the sciatic nerve, which branches from your lower back through your hips and buttocks and down each leg, and usually affects only one side of your body. It most commonly occurs when a herniated disk, bone spur on the spine or narrowing of the spine compresses part of the nerve. This causes inflammation, pain and often some numbness in the affected leg.

Spondylosis is a type of arthritis spurred by wear and tear to the spine. It happens when discs and joints degenerate, when bone spurs grow on the vertebrae, or both. These changes can impair the spine's movement and affect the nerves and other functions. It is a specific defect in the connection between vertebrae (the bones that make up the spinal column) leading to small stress fractures (breaks) in the vertebrae that can weaken the bones so much that one slips out of place. Spondylolysis is a very common cause of lower back pain.

If you have a hormonal imbalance, diabetes, or a weakened immune system, you may be prone to joint inflammation. A long period of inactivity due to an injury, illness, or surgery also makes you more vulnerable to inflammation and adhesions, which are bands of stiff tissue. In serious cases, scar tissue may form. This severely limits your range of motion. Usually, the condition takes two to nine months to develop.

Frozen Shoulder - The main symptoms of a frozen shoulder are pain and stiffness that make it difficult or impossible to move it. Frozen shoulder is the result of inflammation, scarring, thickening, and shrinkage of the capsule that surrounds the normal shoulder joint. Frozen shoulder typically develops slowly, and in three stages. Each stage can last a number of months.

Sciatica - Sciatica occurs when the sciatic nerve becomes pinched, usually by a herniated disk in your spine or by an overgrowth of bone (bone spur) on your vertebrae. More rarely, the nerve can be compressed by a tumor or damaged by a disease such as diabetes. There might be feelings of discomfort anywhere along the nerve pathway, but it's likely to follow a path from the lower back to the buttock and the back of the thigh and calf.The pain can vary widely, from a mild ache to a sharp, burning sensation or excruciating pain. Sometimes it can feel like a jolt or electric shock. Usually only one side of the body is affected. Some people also have numbness, tingling or muscle weakness in the affected leg or foot but might have pain in one part of your leg and numbness in another part. Risk factors for sciatica include age, obesity, diabetes, occupation and prolonged sitting.

Spondylolysis - Spondylosis is an axing phenomenon. With age, the bones and ligaments in the spine wear, leading to bone spurs (osteoarthritis). Also, the intervertebral discs degenerate and weaken, which can lead to disc herniation and bulging discs. However, the cause of spondylolysis is not as clearly defined. Most believe it is due to a genetic weakness of the pars interarticularis but spondylolysis can be present at birth or occur through injury. Repeated stress fractures caused by hyperextension of the back (as in gymnastics and football) and traumatic fractures are also causes. The most common cause in adults is degenerative arthritis. Early signs and symptoms of might include pain and stiffness in the lower back and hips, especially in the morning and after periods of inactivity. Neck pain and fatigue also are common. Over time, symptoms might worsen, improve or stop at irregular intervals.

In the modern world, it’s referred to as ‘stressed out’ but from an Ayurvedic perspective, it (physical symptoms of stress) is seen as a manifestation of vata derangement. If your vata is increased, it can causes problems like constipation, arthritis, chronic pain, anxiety and more. This is often caused as a result of a combination of climate, stress, lifestyle decisions, and other factors, such as the aging process, certain illnesses, and even constant travel.

Ayurveda has a long history detailing the use of herbs and herbal combinations which are very effective in balancing the doshas. In Ayurvedic medicine, vata dosha is thought to control the mind, breathing, blood flow, heart function, and even the ability to get rid of waste through your intestines. Things that can disrupt it include eating again too soon after a meal, fear, grief, and staying up too late. If vata dosha is your main life force, you’re more likely to develop conditions like anxiety, asthma, heart disease, skin problems, and rheumatoid arthritis.

The three doshas in Ayurveda are Vata, Pitta, and Kapha. They are biological energies found throughout the human body and mind and govern all physical and mental processes and provide every living being with an individual and personalised outline for health and fulfilment. The doshas are derived from the Five Elements and their related properties. Vata is composed of Space and Air, Pitta of Fire and Water, and Kapha of Earth and Water.
Vata is the energy of movement and the force governing all biological activity. It is often called the king of the Doshas since it governs the body’s greater life force and gives motion to Pitta and Kapha. The main locations of Vata in the body are the colon, thighs, bones, joints, ears, skin, brain, and nerve tissues. Physiologically, Vata governs anything related to movement, such as breathing, talking, nerve impulses, movements in the muscles and tissues, circulation, assimilation of food, elimination, urination, and menstruation. So aggression in the vata can lead to many illness and disorders including sciatica, arthritis, spondylosis, muscle weakness (hemiplegia) and more which are caused due to impaired digestion. A faulty digestive system causes the buildup of toxins (ama) that accumulate in the minute channels of the body and the body needs cleansing herbs that eliminate the toxic build up, followed by digestive herbs that restore proper digestion to ease pain and aid recovery.