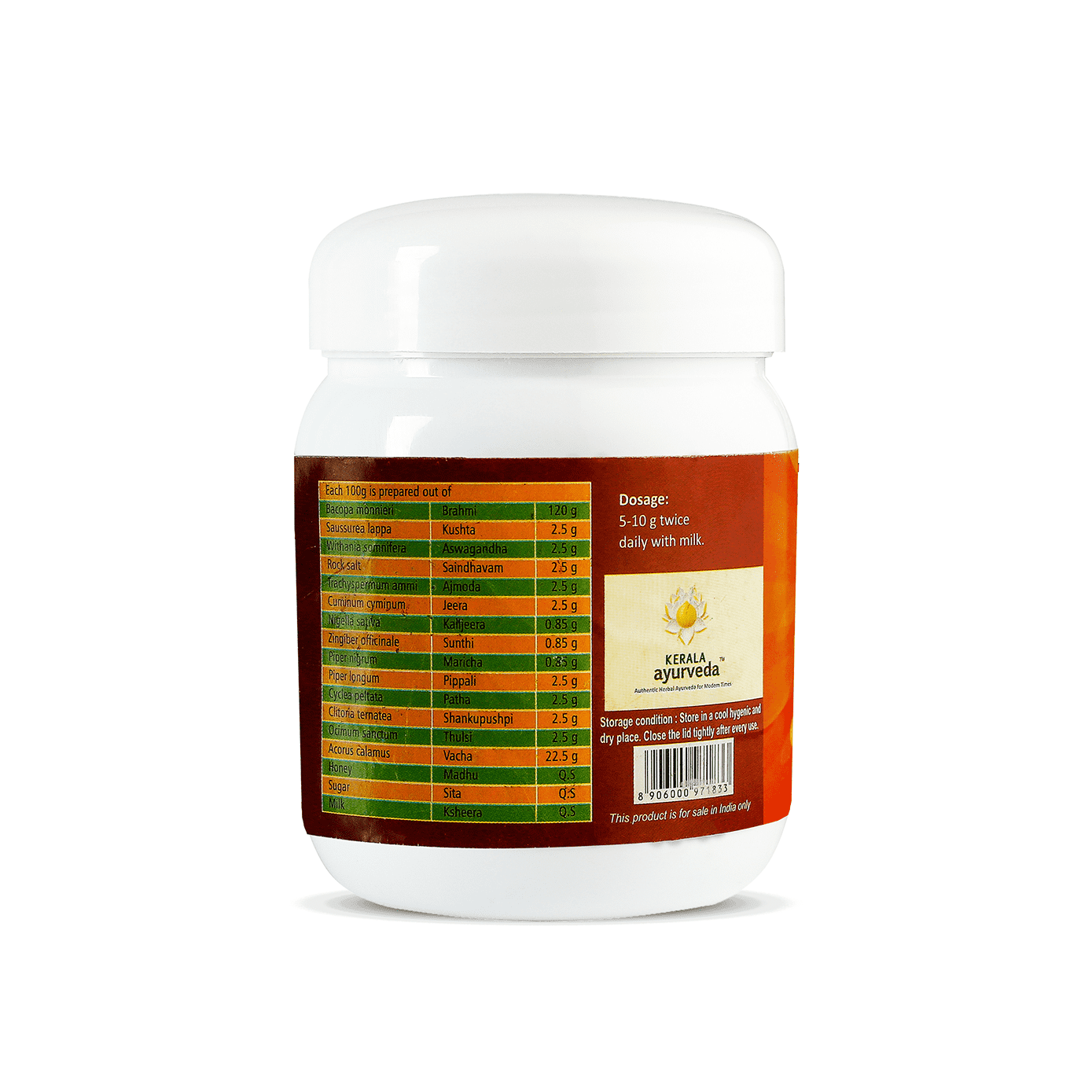 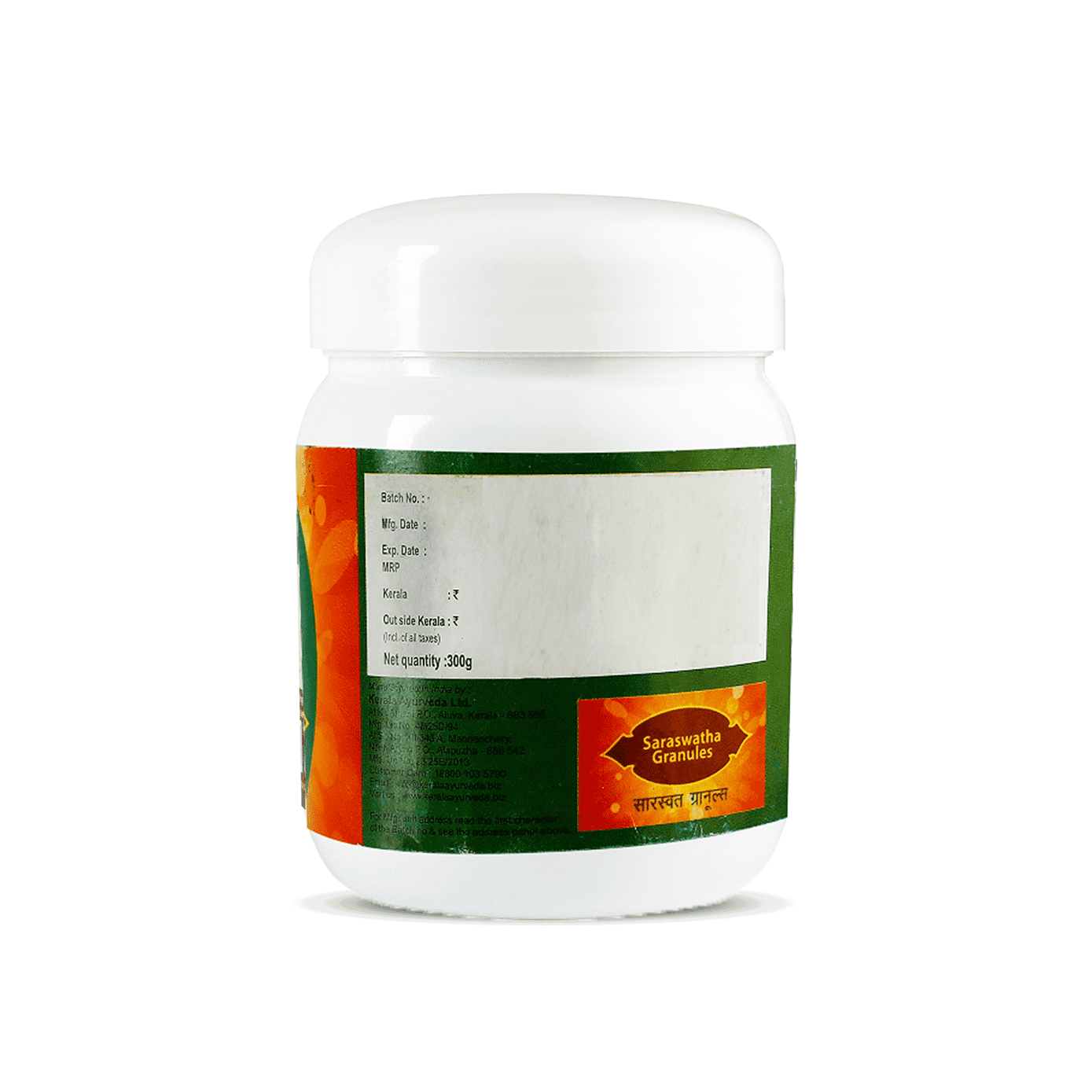 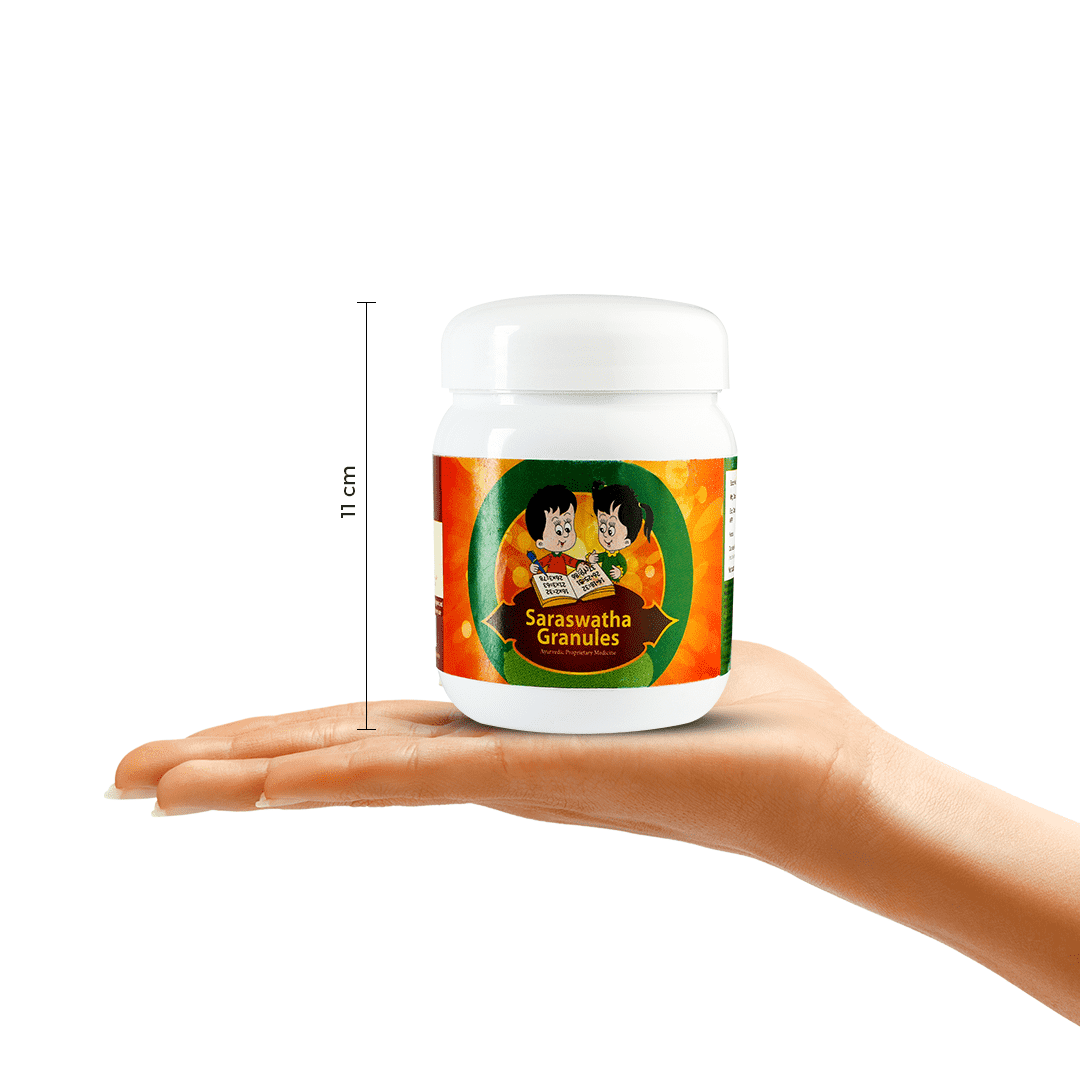 Children start developing cognitive capabilities, memory power, and recall capacity from a tender age of three. During their formative years, the intake of a balanced diet alone will not guarantee better memory performance, concentration, and speech delivery.

The fine motor skills and gross motor skills development among children depend on how their nerve impulses communicate with their pivotal nerve center.

Children often show disinterest in studies, learning new things, and communication. The reason is the resistance of their brain to process the incoming signals. This affects their cognitive functions such as alertness, mental processing and organizing of facts learned through observation and communication. Saraswatha granules is a delicious modified dosage form of the classical preparation, ‘SaraswathaChoornam’. With the power of potent herbs like Brahmi (Bacopa monnieri), Kushta (Saussurea lappa), Ashwagandha (Withania somnifera) and Shankhpushpi (Clitoria ternatea), among others, in a palatable base of sugar and honey, Saraswatha granules help in brain function optimization, better memory, and concentration levels among children. A natural mental rejuvenator, Saraswatha Granules is ideal for Kids up to 15 Years of age since it not only enhances memory power and cognitive functions, but it also improves total health and vitality, naturally.

Children these days are exposed to a lot of complexity in the pretext of intelligent learning. They often find it difficult to grasp what is going on around them. Saraswatha granules help improve their capacity to learn, memorize, and recall events through applied cognition. It helps enhance Learning, Academic Performance and Improve Mental Ability.

Saraswatha granules contains rich source of herbal nutrients and antioxidants responsible for their ability to boost attention. It contains Shankhpushpi and Brahmi as major ingredients and these ingredients helps increase retention power of the mind by strengthening brain functions, attention span, alertness and nerve coordination.

Speech is developed in children while they are toddlers, but the right pronunciation, willingness to speak, and response may change based on the level of their brain development. Speech impairment like stammering is a major problem in many children. Saraswatha Granules addresses this problem by improving the clarity of speech.

This product tastes best when taken with milk. 3 g twice daily with milk as advised by your physician.

This versatile herb has the following properties that add to the Saraswatarishta benefits:

When there is resistance to the flow of signals in the nervous system it manifests as a disinterest in learning new things, studying and communicating. This affects the children’s cognitive abilities to be alert and process and understand what they have learned. They find it challenging to observe and communicate. Saraswatha Granules are made based on the traditional Saraswatha Churnam or Saraswatharishtam but with a delicious taste and modified dosage suited for children. It is an ayurvedic medicine formulated specifically to help boost memory and concentration. This Ayurvedic medicine for memory improvement helps to improve and optimise concentration, brain function and memory in children. It helps rejuvenate the brain and is suitable for children up to the age of 15. Saraswatharishtam helps improve Learning (Dhi), Memory (Dhriti) and Recall (Smriti). The formulation helps strengthen the brain function thereby enhancing retention power, attention span, alertness and nerve coordination. The ingredients of Saraswatha Granules help increase the cholinergic function which increases the cognitive functions of the child. The child is able to be alert, attentive and has improved reasoning, communication and memory functions.

Saraswatarishta helps make tasks associated with learning such as memory processing, logical thinking, sentence repetition and memory retention become much easier. Saraswatharishtam benefits communication and speech abilities. The child is able to pronounce and enunciate their words better. Speech issues such as stammering and unclear speech can be improved with this formulation.

Children’s cognitive and memory retentive powers develop at a rapid pace when they are young. A child goes from an infant to walking and talking toddler in just a couple of years. They then continue to grow, observe and learn from their environment and through schooling. Their memory, cognition and capacity to recollect are all dependent on how well their nervous system and nerve impulses communicate and develop. A good balanced diet and healthy lifestyle is essential for children’s development. The good health of their nervous system is vital to being able to learn, communicate and function well emotionally. A good tonic for brain stimulation is a good support to child development.

When children’s brain and nervous system are at their optimum to receive and process all the stimulus that they receive, the child will happily process and understand all that he/she sees. This will help make learning quick and fun as well as help the child to better retain what is learned. When all the brain and nerve centres are functioning optimally, a child is able to observe, process, understand and communicate with ease. A healthy nervous system also keeps the child’s energy levels and emotions well balanced.

The Nervous System And Western Medicine

The brainstem connects the brain to the rest of the body through the spinal cord and also governs the basic functions of the body such as breathing. The back of the brain that is above and behind the brain stem is the cerebellum. It controls the motor functions of the body. The largest part of the brain is the cerebrum that has four lobes that are in control of the voluntary functions, movement, language, memory, sensory processing etc. Brain tissue is divided into grey and white matter. The grey matter is formed mainly of the head of the neurons and is the part where the synapses are formed while the white matter is the myelinated axon tails that carry signals.

The Ayurvedic Perspective Of The Nervous System - Majja Dhatu

In Ayurveda, the nervous system is associated with the Majja Dhatu. Majja means marrow and in Ayurveda, the brain, spinal cord and bone marrow are treated as one.

As per the principles of Ayurveda, the metabolic process of the Majja Dhatu’s formation is by the Asthi Dhatu (which is unstable or Posaka) flowing through the Majja Vaha Srota (channel) into the Majja Dhara Kala. It is digested by the Majja Agni. This forms the marrow as well as the sclera and the sclerotic fluids of the eye and the waste products of this process (Malas) are the eye secretions.

The most vital elements that ought to be in optimum balance for the production of Majja Dhatu are water and air. It is the air balance that regulates nerve impulse flow while water counterbalances the air and ensures that the nerve is protected from excessive agitation and motion. Though the brain and the myelin that covers the nerves are primarily composed of fat, their element is water and has Kapha characteristics.

The Majja Dhatu is the one that governs a person’s sense of feeling fulfilled and complete. So any problems and deficiency here could make a person feel hollow, empty and unmotivated. In the subtle body the flow of Prana through the Svadhisthana and Anahata Chakras affects the Majja Dhatu.

When the Kapha Dosha is impaired within the Majja Dhara Kala the tissue formed is excessive but low quality. This results in sluggish movement of nerve impulses (Prana). A greater increase in the Kapha Dosha will finally obstruct and block the flow of Prana entirely. The symptoms of this are very similar to the Vata Dosha imbalance and it is commonly misdiagnosed as the same.

Pitta dosha vitiation results in the minimal or moderate formation of tissue that is however highly efficient allowing good movement of Prana. But excessive Pitta Dosha causes the inflammation and excessive metabolization of the tissue. Neuritis is a disorder that is caused by the inflammation of the tissue. When there is excessive metabolism it destroys the myelin sheath of the nerves and causes disorders such as multiple sclerosis. The similar mechanism in the brain causes dementia and diseases such as Parkinson’s.

Imbalanced Vata Dosha causes irregularity in the formation of tissue that is also fragile and of low quality. When there is an irregular formation there are less stabilising factors in the nerves and hence the prana moves without restraint. The person’s reactions are often sudden and not measured or too slow and deficient. Hyperactivity and hypoactivity are symptoms of this order. There are tics and tremors that may be present with jerky movements. When this imbalance persists over a longer period of time the nervous system tissues get thinned and dry causing ineffective movement of Prana. While this may seem like a Kapha imbalance characterised by deficient Prana flow. But when the Kapha imbalance caused Prana flow deficiency is due to obstruction the Vata imbalance blockage is because of structural damage.

When there is any problem with the Maha Vaha Shrota there is an overflow of the Doshas into the Rasas and the Rakta Vaha Srotas and get relocated to the Majja Vaha Shrota and the Majja Dhatu. Though it is possible for any Dosha to relocate to the Majja Dhatu the nerve problems such as pain and motion alteration is termed as a disease of Vata or Vata Vyadhi. Nervous problems can be caused by any of the Dosha imbalances. When Ama is also involved it further complicates the condition.

The Majja Dhatu can be evaluated and diagnosed with the standard Western methods of testing. But traditional methods of evaluation involves studying the secretions from the eyes early in the morning, the colour of the eye’s sclera as well as their luminosity. When the excretion of the eye is dry and crusty the Vata Dosha is imbalanced, oily or mucousy discharge indicates Kapha imbalance and yellow secretions which might be oily indicate a Pitta imbalance.