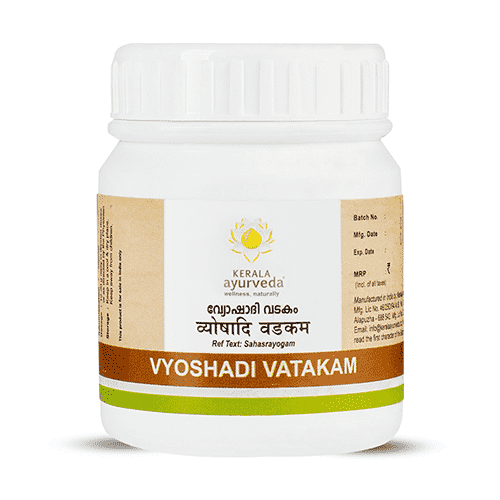 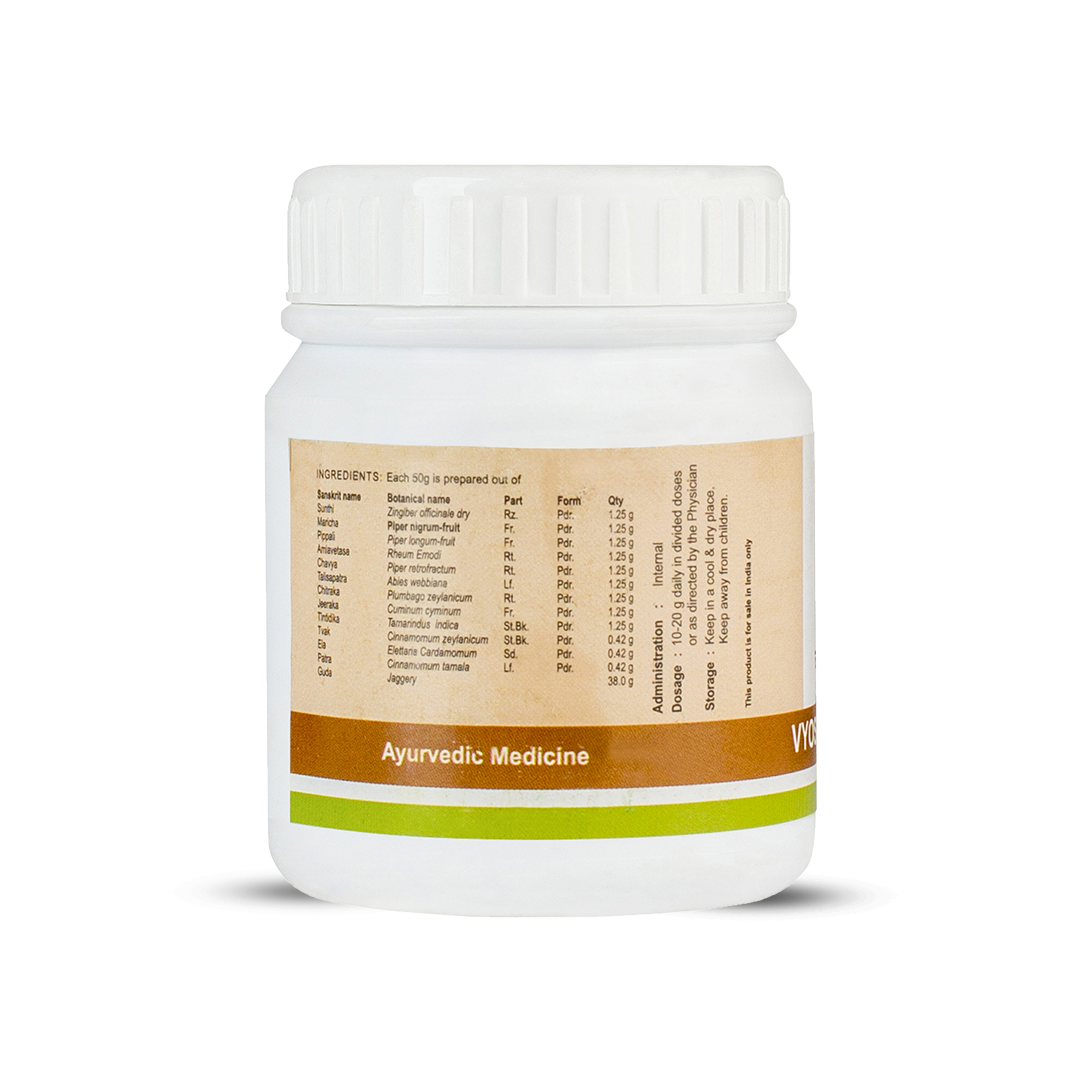 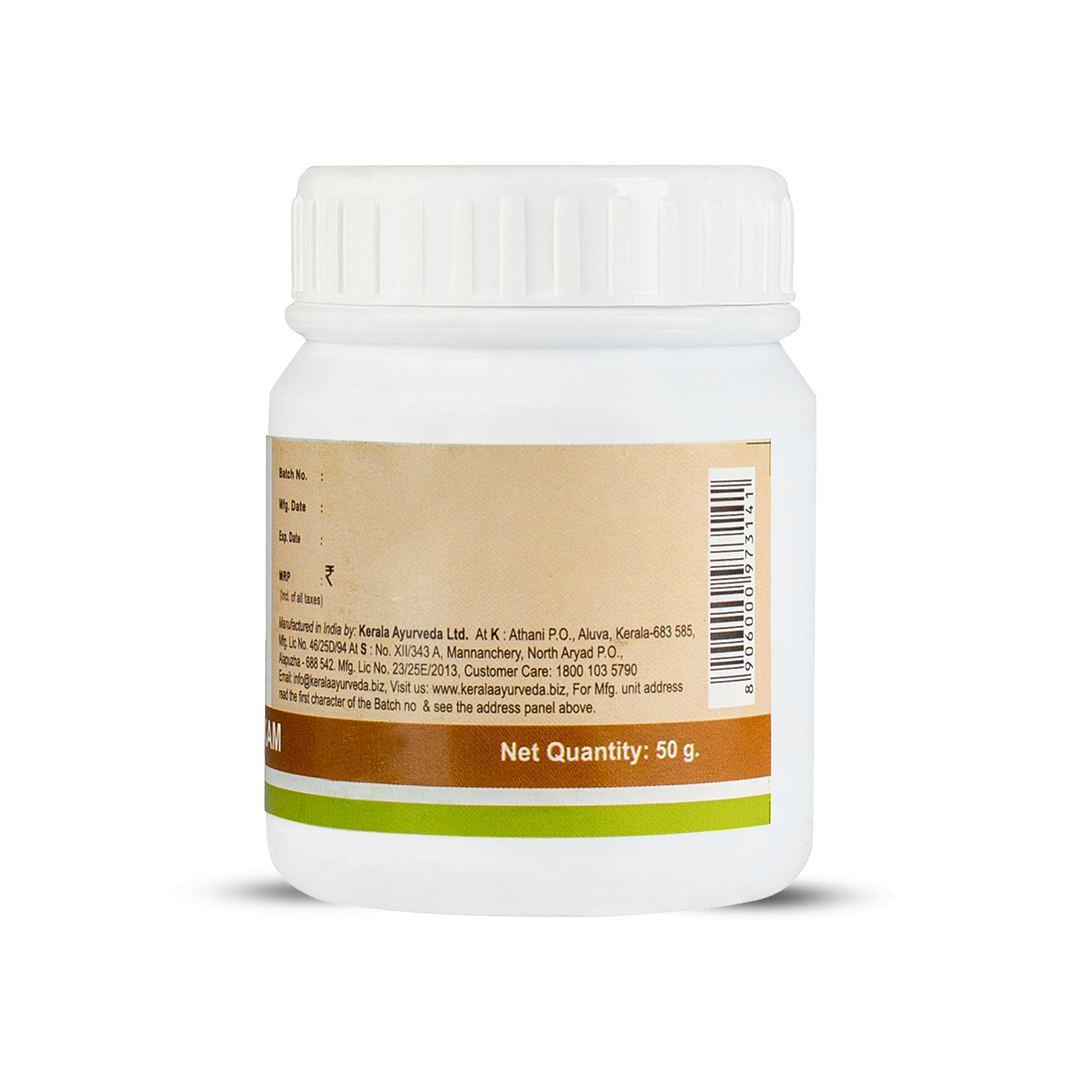 Cough and cold make it very difficult for a person to go about their daily life easily. Respiratory infections can range from a sore throat to bronchitis or asthma. People who rely on their voice for their professions cannot work when they have respiratory problems. Vyoshadi Vatakam is a traditional Ayurvedic medicine for cough and sore throat. Its ingredients are also known to help treat symptoms of respiratory infections such as bronchitis and sore throat.

The Vyoshadi Vatakam contains potent natural herbs and ingredients that are widely used in the preparation of Ayurvedic medicine for cold, respiratory infections, cough, sore throat, bronchitis, and asthma. Vyoshadi Vati uses a combination of herbal ingredients to help balance the Kapha and Vata Dosha and thereby help provide relief from respiratory problems. Kerala Ayurveda has now made it very easy to buy Vyoshadi Vatakam online right on this website.

10 to 20 gms daily in divided doses or as directed by the physician.

Ayurveda defines breathing problems as Vata and Kapha related problems. Respiratory trouble is called Swasa Roga. Ayurveda describes three Doshas that govern the human body; the Vata, Pitta, and Kapha Doshas. Each person has their own individual Dosha balance that should be maintained to be in good health. When the Doshas are thrown out of balance, illnesses and disease result. The process of digestion is also vital to health. When the digestive process is good and efficient, the nutrition that is taken reaches the body tissues. The metabolism is efficient and there is no metabolic waste generated. Ayurveda calls metabolic waste Ama and this causes a host of health issues.

Bronchial asthma is called Tamaka Swasa. It is caused by improper food and other lifestyle habits. Some of the causes defined by Ayurvedic texts are:

Ayurveda looks at the treatment of asthma in a holistic manner. There are Doshas defined by Ayurveda that encompass the physical, mental, psyche, breath, and bliss bodies. When these Doshas are in good balance, the person is in good health. Unbalanced Doshas cause problems like asthma.

Annamaya Kosha - The person with asthma has difficulties with breathing, and the breath becomes very shallow. The lungs tighten up, and the air sacs do not expand. The emotions of fear, anger, stress, and depression affect the asthmatic person. So it can be concluded that the psyche, as well as the bliss body, are affected by the asthmatic person’s inability to connect to the life force.

Ayurveda does not treat asthma symptoms that need to be managed. Instead, it treats asthma by balancing the affected Doshas. The person has to make lifestyle changes to balance the Doshas and also have good digestion and metabolism.  as well as correct the other factors involving emotions and the mind to resolve the Kosha blockages.

Asthma is the inability of the breath body or the life force Prana to move.  So, when a person has asthma they are to be treated and supported not just by medication but also with psychological support. They are counselled to be able to handle all the negative emotions or depression that might be the trigger for asthma.  A patient being treated for asthma has to be encouraged to maintain a positive outlook. Panchkarma treatment is prescribed for patients who are strong enough. Dietary recommendations are advised based on the affected Doshas. Food should be eaten warm and with an emphasis on a fresh and balanced diet. The person should have habits and eat food that does not aggravate the Dosha that is imbalanced.

Modern treatment for asthma uses medication to treat symptoms of an asthma attack. This is coupled with lifestyle changes to manage the disease. There are two types of asthma; T2 high or non-T2 ( or T2 low). T2 is due to allergic reactions and is called allergic or eosinophilic asthma because of elevated levels of eosinophils in blood or sputum. T2 asthma is more common in families that have a history of allergies. This can be skin or food allergies as well. When it occurs in childhood it usually improves as the child grows older. It can also occur later in life. It is easier to treat than the nonT2 type of asthma. It is also seen that due to the inflammation caused by this type of asthma there are elevated nitric oxide levels in the body.

People who have other asthmatics in the family are at a higher risk of suffering from the same. Being exposed to secondary smoke or having had a viral respiratory disease in childhood makes one more at risk for this type of asthma. Neutrophilic or non-T2 asthma is more difficult to treat. It is usually caused by obesity or other non-allergic factors.

Cold or cough may cause inflammation resulting in a sore throat and running nose. The mucus in the respiratory tract irritates the nerves in the lining and triggers a cough. The inflammation of the bronchial tubes causes bronchitis. Lung infections such as pneumonia are caused by viruses or bacteria. These problems are treated symptomatically. A non-viral infection would be treated with antibiotics. Colds and coughs are treated with anti-inflammatories, decongestants, cough suppressants, and expectorants. Asthma is not curable and is managed with corticosteroids (ICS), long-acting bronchodilators (LABA),  anticholinergic agents, antimuscarinic agents, corticosteroids, and systemic steroids.