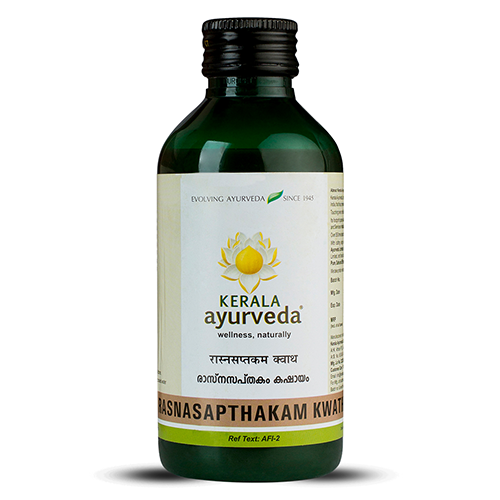 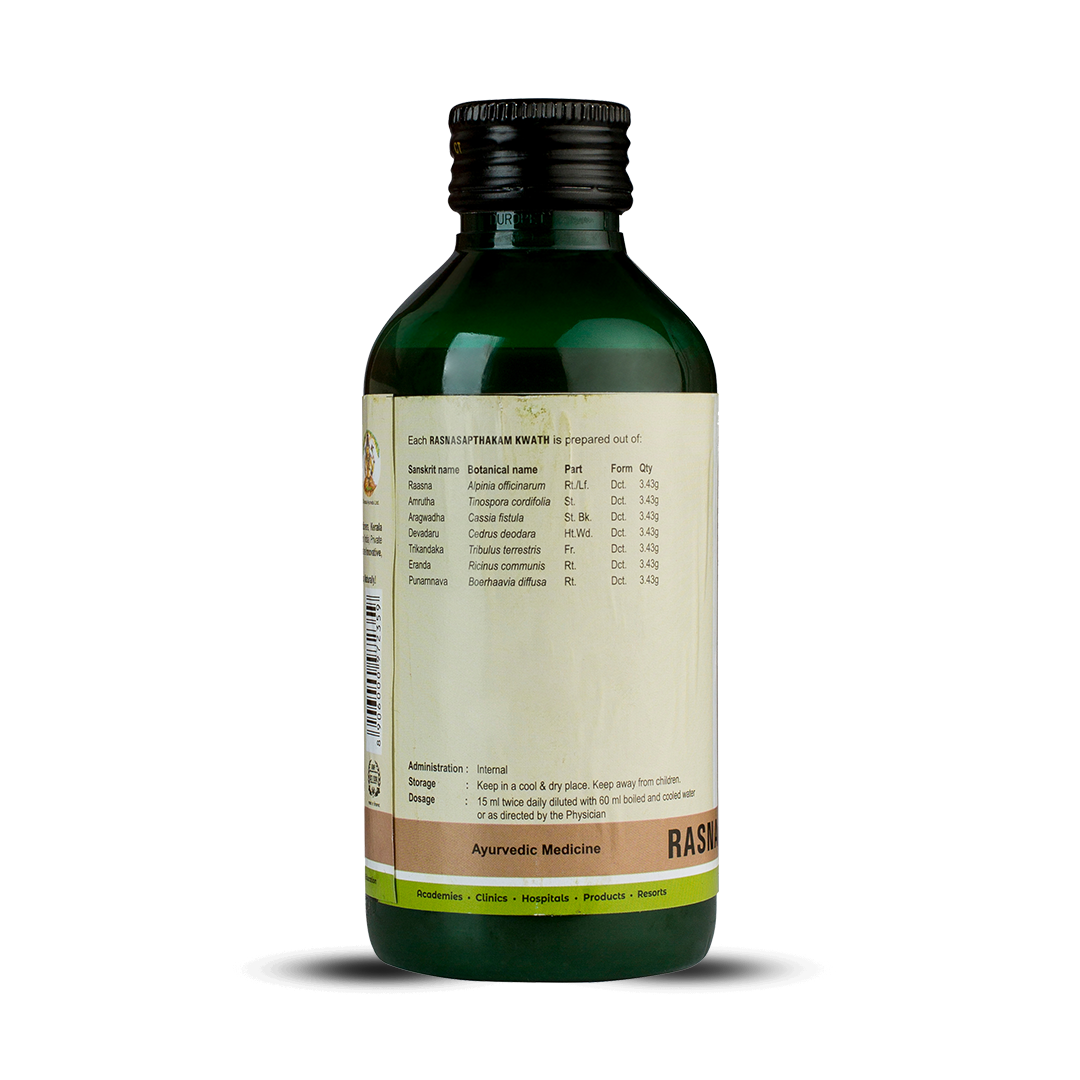 Backache and joint pain is a problem that affects most people of both genders at some point in their life. It makes doing one’s daily tasks very difficult. Knee pain impacts a person’s mobility. Rasnasapthakam Kwath aims to help provide relief from the above discomforts.

Rasnasapthakam Kwath contains a mix of powerful herbs widely used in the preparation of Ayurvedic medicine for joint pain and swelling as well as Ayurvedic backache medicine backache and knee pain. Some ingredients are great for the elderly undergoing swollen knee treatment. This potent Ayurvedic formulation is made with Rasna as the star ingredient. It is combined with other ingredients that make up a total of seven which translates as “Sapta’, hence the name Rasnasapthakam. This medicine is a Kwath which is a liquid decoction of the herbs. Such formulations are commonly used in Ayurvedic treatment to balance the Vata and Kapha Dosha caused joint problems such as back pain, arthritis, gout, lumbago sciatica, knee pain.

15ml twice daily diluted in 60ml of boiled and cooled water or as directed by the Ayurvedic physician.

Ayurveda and Back Pain

Back pain is called Katishoola in Ayurveda. The word ‘Kati’ refers to lower back/hip and ‘Shoola’ is pain. This pain is caused primarily by Vata dosha imbalances and is classified under the Vataja Nantmaja Vyadhis or Vata diseases in the classics.

There are two major causes of joint problems according to Ayurveda. The first type is caused by joints being poorly nourished. This causes low bone density and weakness in the joints. It is caused by the aggravation of the Vyana Vata. It impacts the ability of the digestion, circulation and nourishment to the joint. The Shleshaka Kapha lubricates the joints. The aggravated Vyana Vata dries up this joint lubrication and intensifies the problem. The second type of joint problems is caused by Ama. Ama is the metabolic toxic waste that is generated when the digestive process is not efficient or complete. This Ama, when generated over a longer period of time, accumulates and becomes a highly toxic Amavisha. This is the primary cause of many health issues. When the Ama affects the joints over a period of time it causes inflammation and swollen joints. It is the cause of degenerative diseases that affect the joints. Amavisha affects a weaker part of the body and causes weakness or stiffness. When it is a degenerative problem it can affect the whole body. One should attempt to rebalance the Doshas with proper diet, lifestyle and Ayurvedic medicines. In addition to medicinal backache treatment and Ayurvedic medicine for knee pain and swelling the Ayurvedic doctor may also prescribe external Panchkarma treatments and exercises to restore flexibility to the affected parts of the body. Detoxification and removal of Ama are important. One should make lifestyle and diet change to ensure that the body does not retain Ama after treatment.

Back Pain – An overview

There are many causes of joint pain according to Western medicine. Some of the most common causes are chronic diseases such as osteoarthritis and rheumatoid arthritis. Gout is a condition that causes joint pain because of the accumulation of uric acid crystals in the body. When a joint is overused it could become painful due to bursitis, a condition that is most common in the elbow, shoulder, hip or knee. Overuse can also cause problems with the tendons in the area called tendinitis. Back pain is most often caused by posture problems and overuse or strain. Knee pain can be caused by lack of use or overuse and strain. Joint pain is usually treated with rest and anti-inflammatory medication. If the pain is because of injury, using an ice pack is recommended.