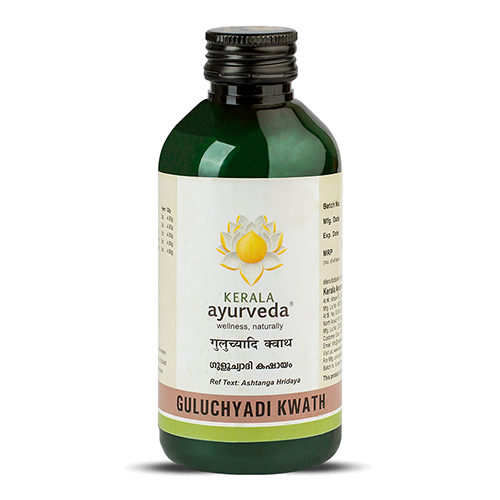 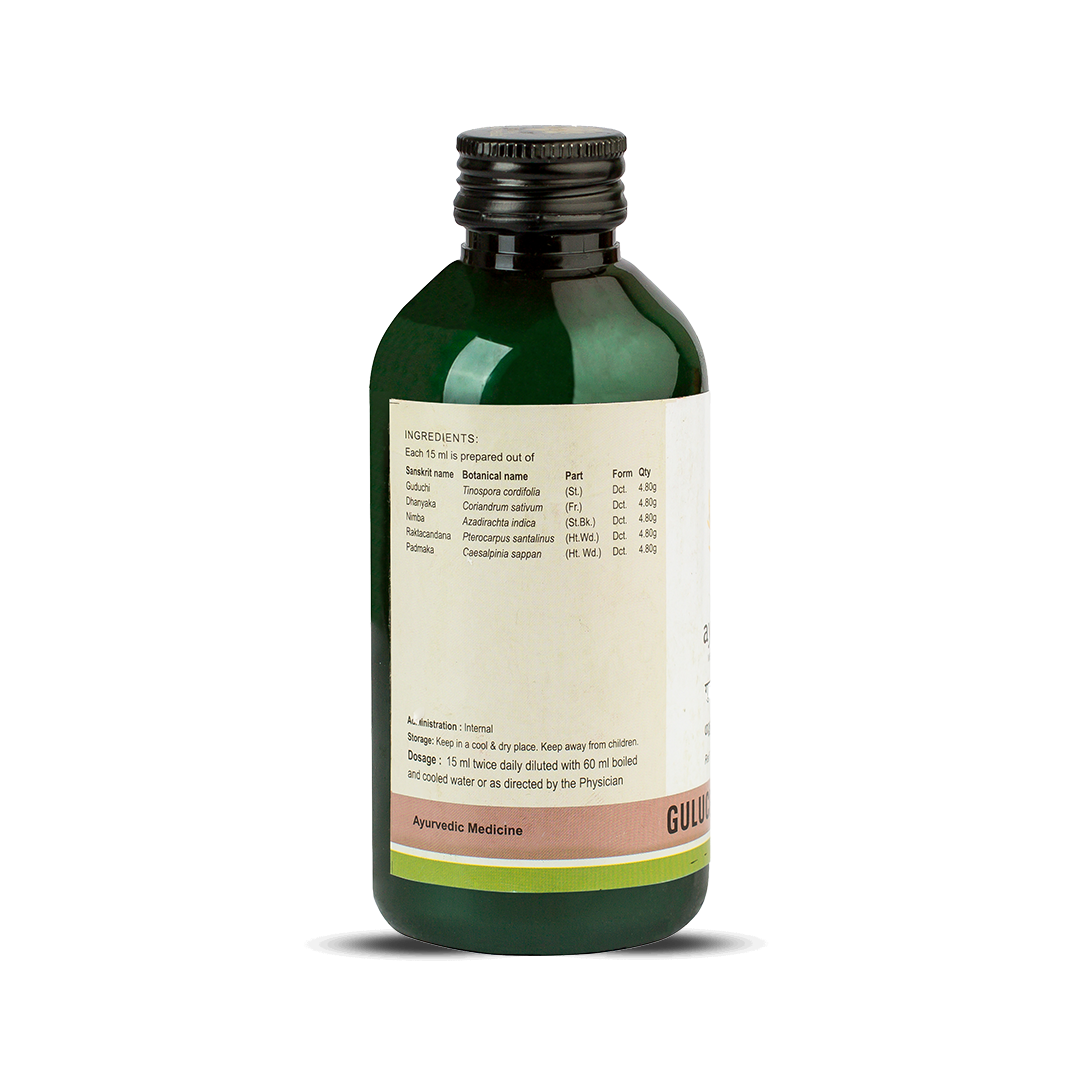 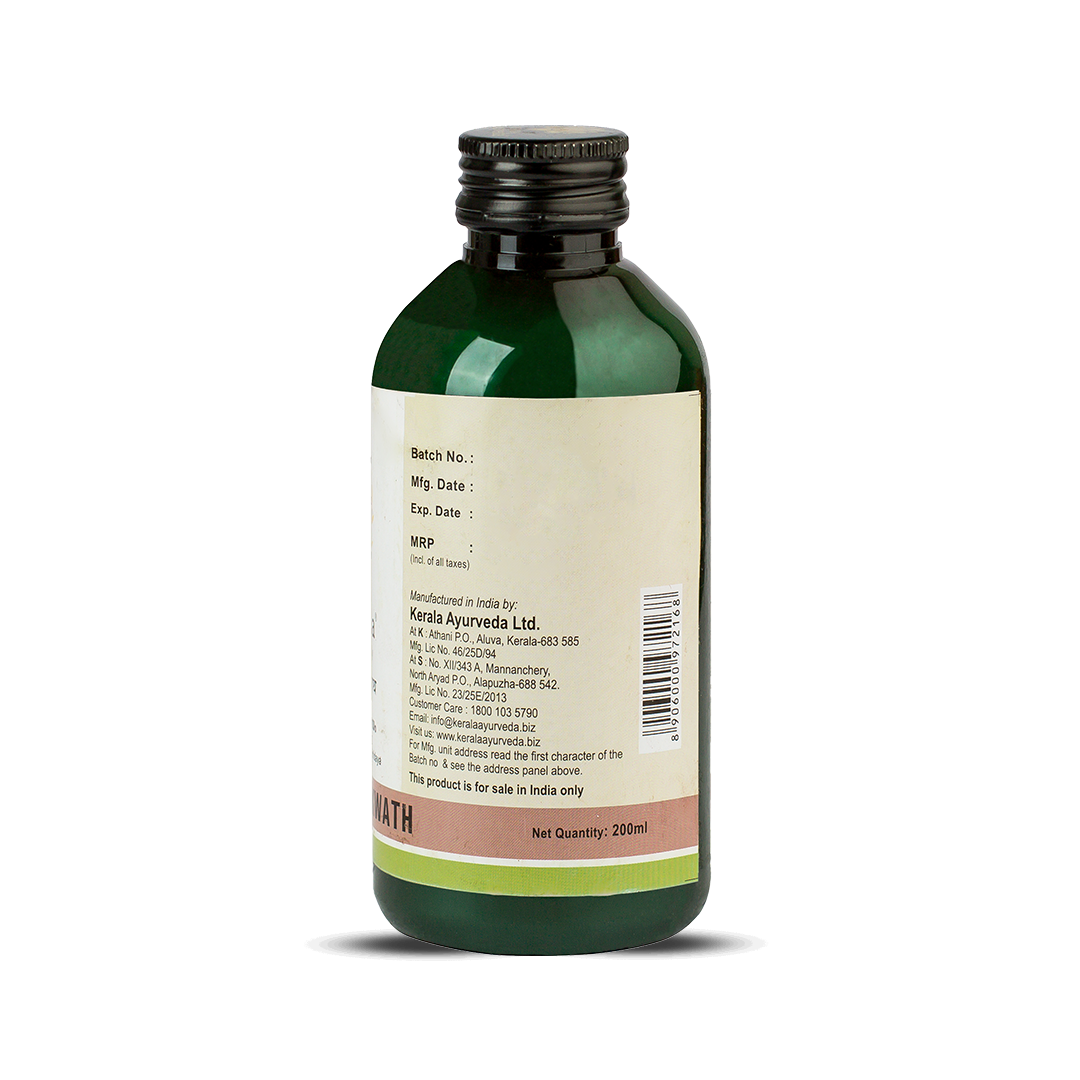 Kerala Ayurveda's Guluchyadi Kwath is an Ayurvedic medicine that is known to help in the ayurvedic treatment of fever and ailments associated with a burning sensation, loss of appetite and vomiting. It also has Pitta-Kapha balancing properties.

The main ingredients in Guluchyadi Kwath are:

Described in Ayurveda as 'amrita', Giloy is known for its numerous medicinal properties. It is well known as an anti-arthritic, digestive, anti-inflammatory, anti-cancerous, and as a blood purifier. It is a key ingredient used in ayurvedic medicine for viral fever

Dhania has therapeutic properties and is used in Ayurveda to treat a range of conditions from stomach illnesses to fevers.

An Ayurvedic Perspective to loss of appetite

Thought to be over five thousand years old, the science of Ayurvedic medicine views the world as it relates to the elements—or doshas of vata, pitta, and kapha. According to Ayurveda, everyone is born with a mixture of these three doshas and identifying an individual's primary dosha is the first step towards finding or attaining an optimal state of balanced and natural health. Ayurveda believes in harnessing the potential of herbs and remedies found in nature to find the cure for various disorders. In Indian Ayurvedic medicine system, there are many medicines which are very effective to treat appetite loss.

In Ayurveda, loss of appetite is usually caused as a result of an individual's weak digestion and/or other stomach problems. The term Agnimandya is used to denote loss of appetite while Ajeerna is used to denote indigestion.  In Ayurveda anorexia is called Aruchi and is said to be caused by an aggravation of vata, pitta and kapha doshas, as well as psychological factors such as fear, anger and stress, leading to suppression of the digestive fire or agni. This leads to the formation of Ama (mucus/toxin) which blocks the gastrointestinal channels of the body and thus disturbs the sense of taste.

Ayurveda states that a harmonious balance of Vata and Pitta doshas are key to maintaining a healthy and normal appetite. Any vitiation in their mutual balance could lead to a loss of appetite. One of the common causes for the vitiation of these two doshas is an irregular eating habit, while other causes include feelings of  anxiety and fear. Physical causes like suppression of impending urges may also lead to an imbalance in Vata and these sequences may lead to disturbances in normal levels of appetite.

Appetite is generally referred to as the desire to fulfil a bodily need, and the type of appetite most commonly experienced is that of hunger. Hunger drives an individual’s desire to eat in order to obtain sufficient calories, essential vitamins and minerals, and to experience satiety/satiation (the feeling of fullness during and after eating). A decreased or loss of appetite occurs when an individual loses the desire to eat. The medical term for this is anorexia. However, loss of appetite usually refers to unintentional appetite loss, which is different from the eating disorder anorexia nervosa that is associated with intentional food restriction. Appetite regulation is a complex process that is controlled by communication between different systems in the body. This includes the central nervous system (especially the brain), digestive system, endocrine system and sensory nerves, which together govern short-term and long-term appetite. A healthy, balanced appetite helps the body stay in a homeostatic state, meaning an individual is able to meet the needs for energy (calories) and nutrients while still maintaining a healthy body weight.

The main causes that lead to loss of appetite

The feeling of a loss of appetite can be physical or psychological, and it is often temporary due to factors such as infections or digestive issues, in which case appetite will return once the individual has recovered. Some individuals may also lose their appetite as a symptom of a long-term medical condition, such as in the late stages of serious illness, including cancer. This is part of a condition that doctors call cachexia.

Some determinants of appetite include: