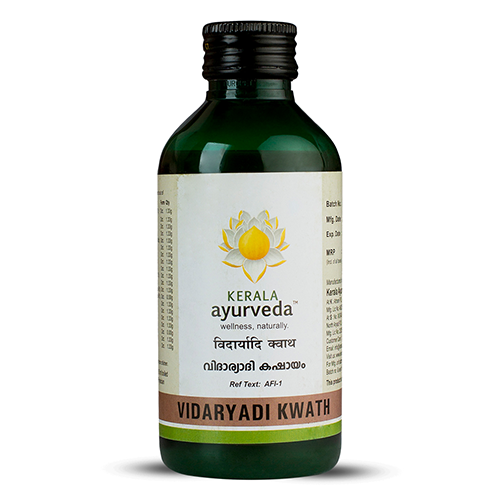 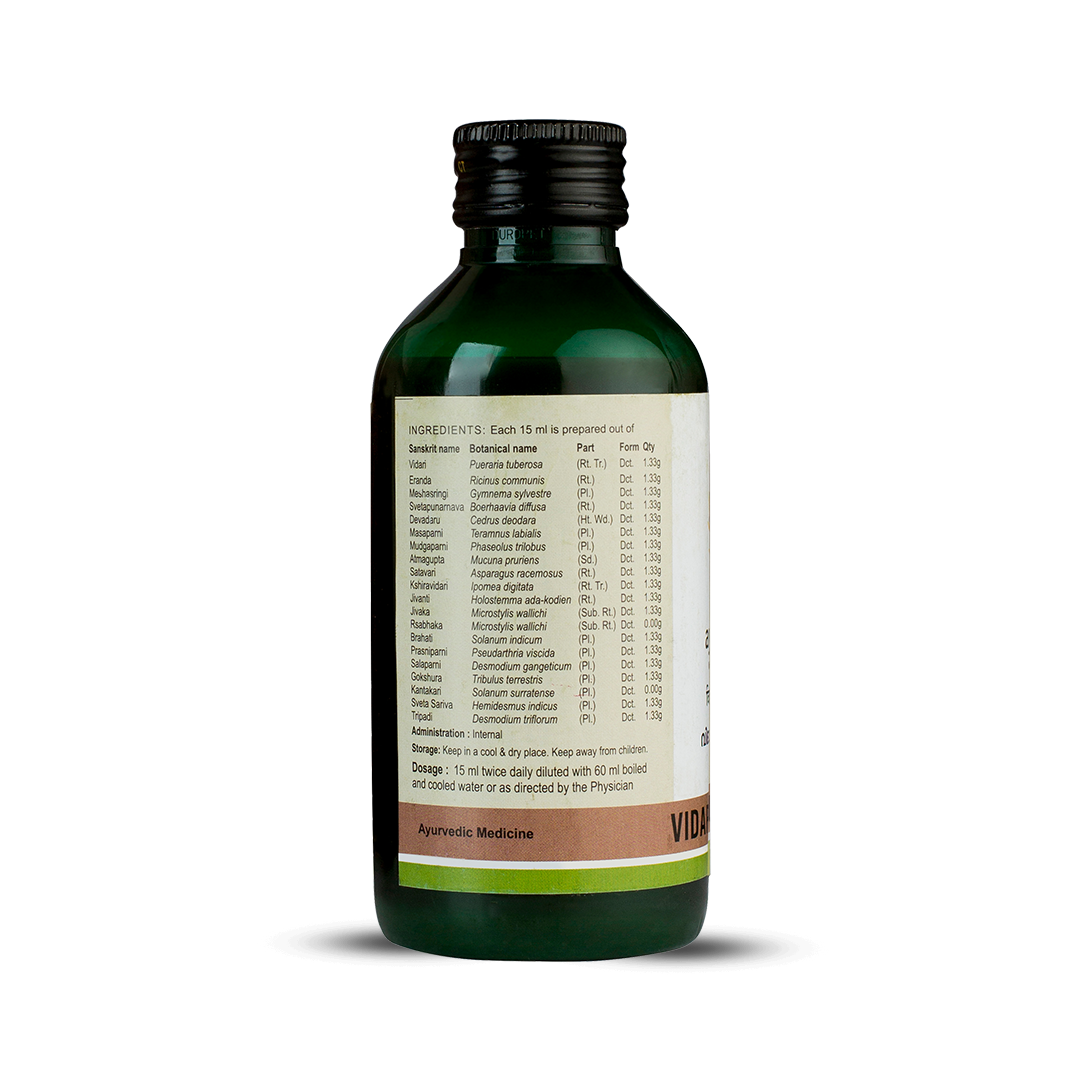 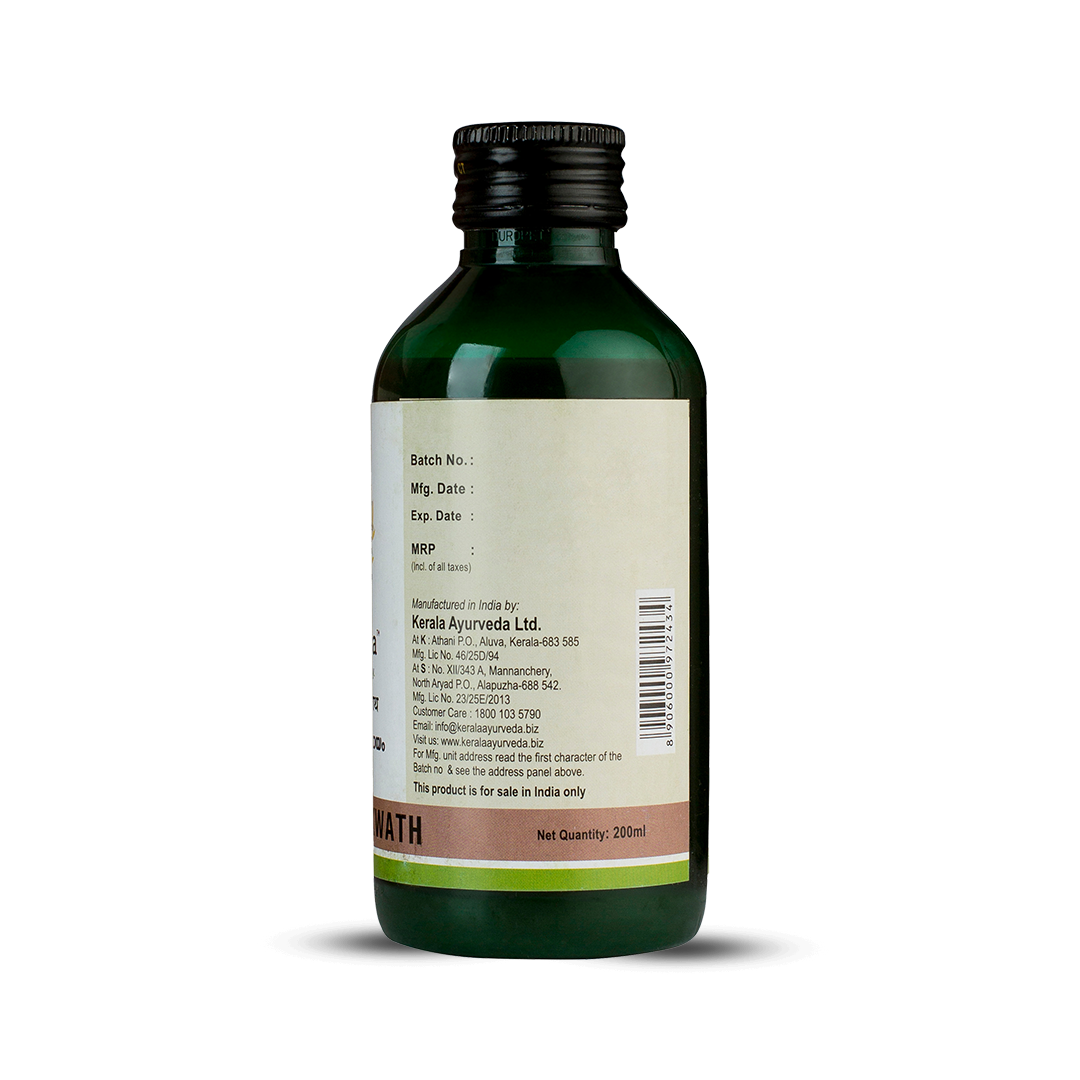 Kerala Ayurveda's Vidaryadi Kwath is a concentrated decoction prepared out of natural herbal ingredients and is said to be helpful in bringing in nourishing muscles and strengthening bones. It also functions as a vata pitta dosha remedy by balancing the two doshas present within an individual.

Translated as the science of life, Ayurveda is an ancient system of healing from India. According to Ayurveda, an individual’s well-being is related to the balance between the body, mind, and spirit as well as their relationship to the external environment. Ayurveda believes in five elements: earth, fire, water, air, and ether/space, and these elements form everything from the taste of food to the changing seasons to a unique individual constitution.

The basic tenet of Ayurveda is that health conditions should be treated with holistic, natural therapies tailored to the needs of each individual. Ayurveda teaches that each individual is a blend of three doshas, or vital energies within the body, ie. Vata, Pitta and Kapha. The individual constitution of a person is derived from the relationship of these three Doshas and because this innate constitutional type predetermines how an individual is functioning physically, mentally, and emotionally, it is an essential concept in Ayurvedic medicine. Each individual is born with an optimal balance and a unique harmony among the three doshas and due to life stressors, an imbalance in the three doshas may arise. The main aim of Ayurveda is to bring back this essential harmony in the body, mind, and soul connection.

Another important concept in Ayurveda is Prakriti, which not only directs daily diet and lifestyle habits but also in treatment. Prakriti is the one which not only determines an individual's physical stature like hair, complexion, eyes, and others, but also the mental make-up of an individual. Prakriti is essential in choosing treatment, lifestyle changes in daily regimens (dinacharya) or seasonal regimens (ritucharya). It is important to note that while imbalances can arise due to aggravation of any dosha as a result of lifestyle choices or seasonal influences (when one goes against their Prakriti), an individual can have an equally pronounced state of Vata, Pitta, and Kapha . Even though it is quite rare, individuals of this dosha type - a state that is also referred to as TriDosha - tend to enjoy exceptionally good health.

When the doshas are in balance, then the body is healthy and according to Ayurveda produces Ojas, the finest end product of digestion. Ojas has an exceedingly fine structure such that it is still material and yet also consciousness.

Ojas is the totality of all the three doshas, and brings strength and vitality, good health, maintains digestion and metabolism, and youthfulness, makes an individual think positively and gives them a proportionally balanced view of problems. An individual with a lot of Ojas feels perfectly blissful and radiates happiness. Externally, for example, Ojas is seen as healthy, shiny skin and bright eyes.

Neuromuscular disorders are a category of disorders that affect the nerves that control voluntary muscles and the nerves that communicate sensory information back to the brain. Neuromuscular diseases damage the nerve cells that send messages to control voluntary muscles. This lapse in communication may result in muscle weakness and atrophy, often causing pain, muscle cramps, twitching and mobility problems. Neuromuscular diseases can affect the muscles, the central nervous system, and the peripheral nervous system, which includes the arms and legs.

The symptoms of neuromuscular disorders vary according to the condition and may be mild, moderate or life-threatening. Some of these symptoms include: