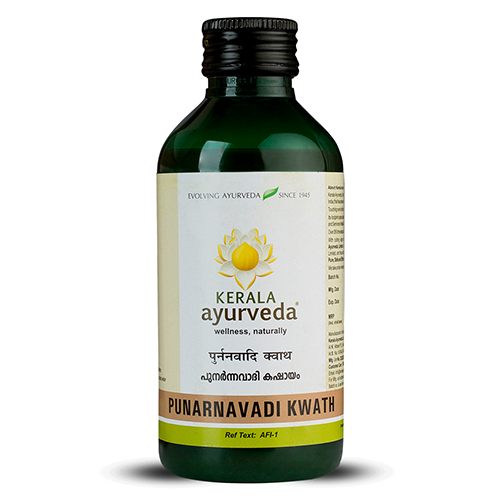 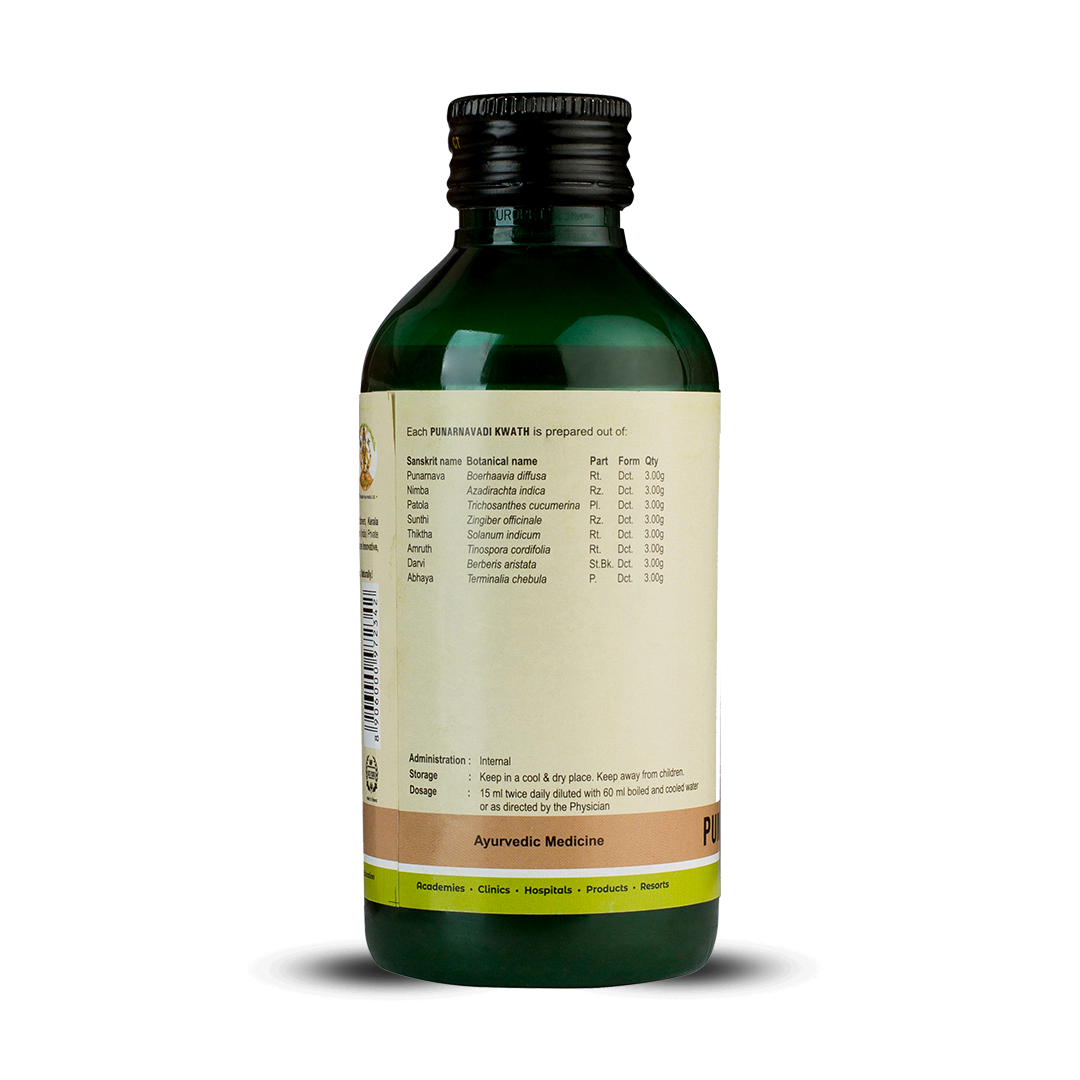 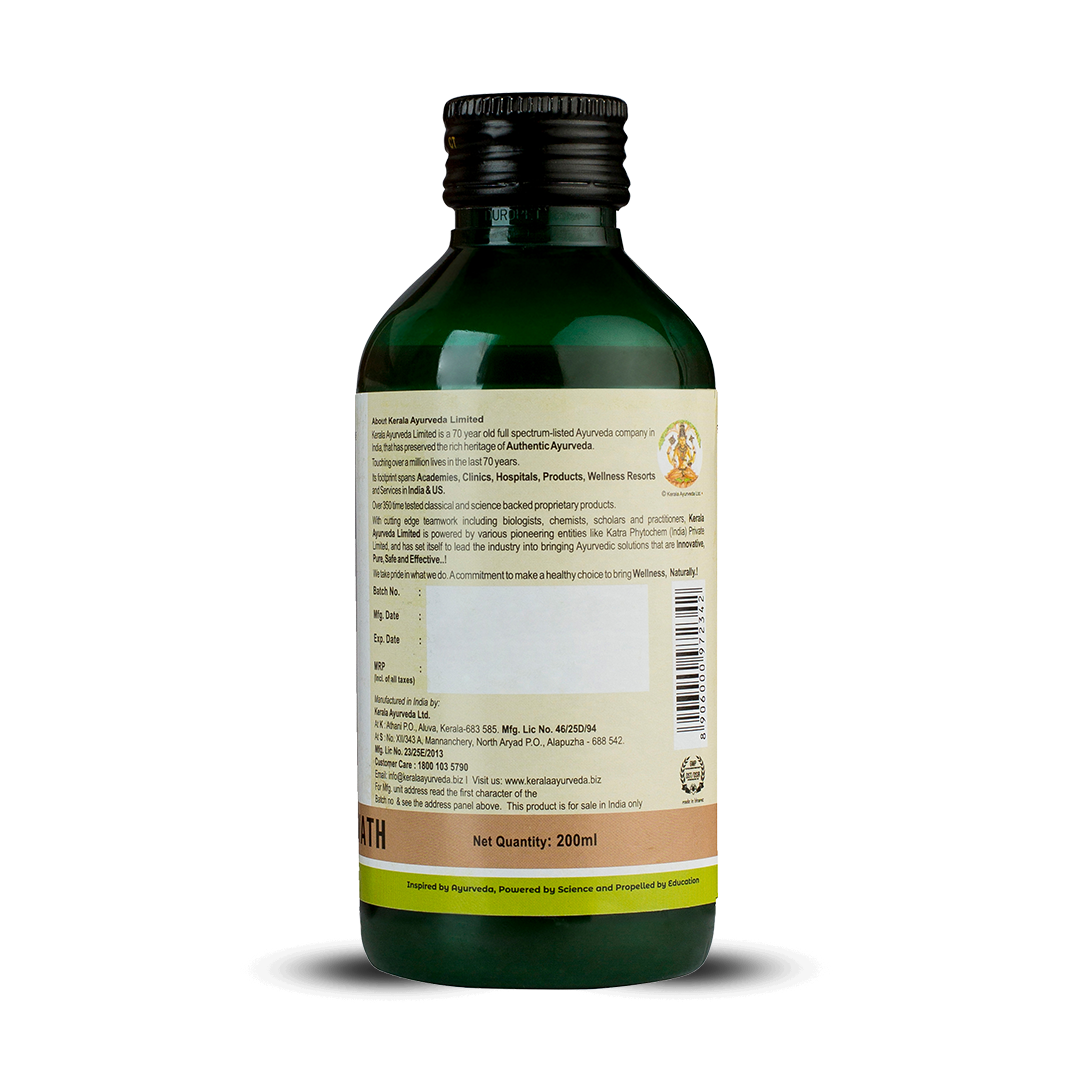 Punarnavadi Kwath is a traditional Ayurvedic medicine that has anti-inflammatory properties that can help find relief from fever and cough.

The Punarnavadi Kwath is helpful in the Ayurvedic treatment of water retention and inflammatory conditions. It contains potent ingredients widely used in Ayurvedic medicine for cough. Some contain anti-inflammatory and anti-pyretic properties Making them viable for ayurvedic fever medicine.

15ml twice a day diluted in 60ml of boiled and cooled water or as directed by an Ayurvedic physician.

Any swelling in the body is caused by excessive fluid accumulation in that part. This is also called Oedema or Edema. Swelling may be localised to a certain part of the body. Water retention in the whole body can cause the person to gain weight suddenly.

Oedema caused by the imbalance of different Doshas has different characteristics. The Kapha Dosha is the Dosha that governs the fluids in the body. So it is rather common to see issues with oedema and swelling in Kapha dominant people. This swelling is the most severe of all and there is a depression in the skin surface that remains for a short while when the area is pressed.

Vata Dosha governs movement and sometimes when the movement and elimination of fluids are not proper there are swelling and oedema. This is the type of oedema that is caused by inefficient blood circulation. It would be accompanied by dry skin and protruding veins. There is no sign of depression when the skin is depressed. The Pitta Dosha can also cause swelling and oedema by blocking channels due to its heaty nature. This swelling has a burning and redness associated with it. It is most commonly an inflammation that is the result of trauma or injury to the area. Sometimes it is also caused by a bite or an allergy.

The treatment of oedema will have to be specific to the causative Dosha. Punarnava is a herb that is used to reduce all kinds of swelling by removing the excess fluid. It is also anti-inflammatory and antibacterial.

Ayurveda calls fever as Jwara. It is when there is a lower temperature in the digestive tract and higher temperature on the outer surfaces of the body. It is usually a symptom of some other problem or infection. It is usually found in Pitta related problems. Ayurvedic medicine for fever balances the temperature between the outside and the digestive tract. Ayurvedic cough medicine corrects the Dosha imbalance that causes the irritation of the airways triggering a cough.

Water or fluid retention occurs when the body does not efficiently remove excess fluids from the body. The main organs and systems that function to eliminate excess water are the kidneys, circulatory system, lymphatic system and hormones. When one or more of these do not function properly there is a retention of fluid.

The treatment of water retention targets the cause of it. One short term treatment is diuretics that encourage the kidneys to eliminate more water. The organ system that is not functioning optimally will be treated. A person who leads a sedentary lifestyle will be encouraged to be more active in order to enhance circulation. If the swelling is because of inflammation or an allergy it will be treated with anti-inflammatory, anti-infective or anti-histamine medication. Fever is treated with antipyretics and cough with anti-tussive and expectorant medication.