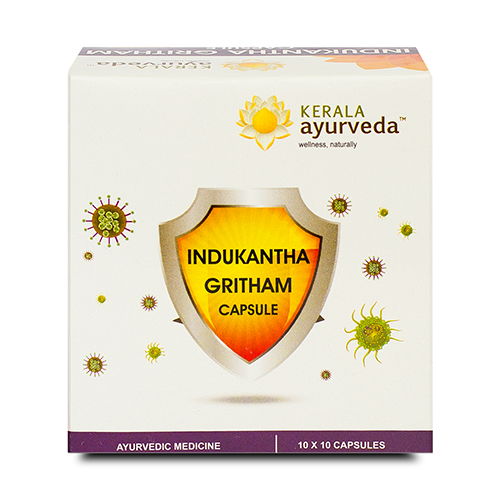 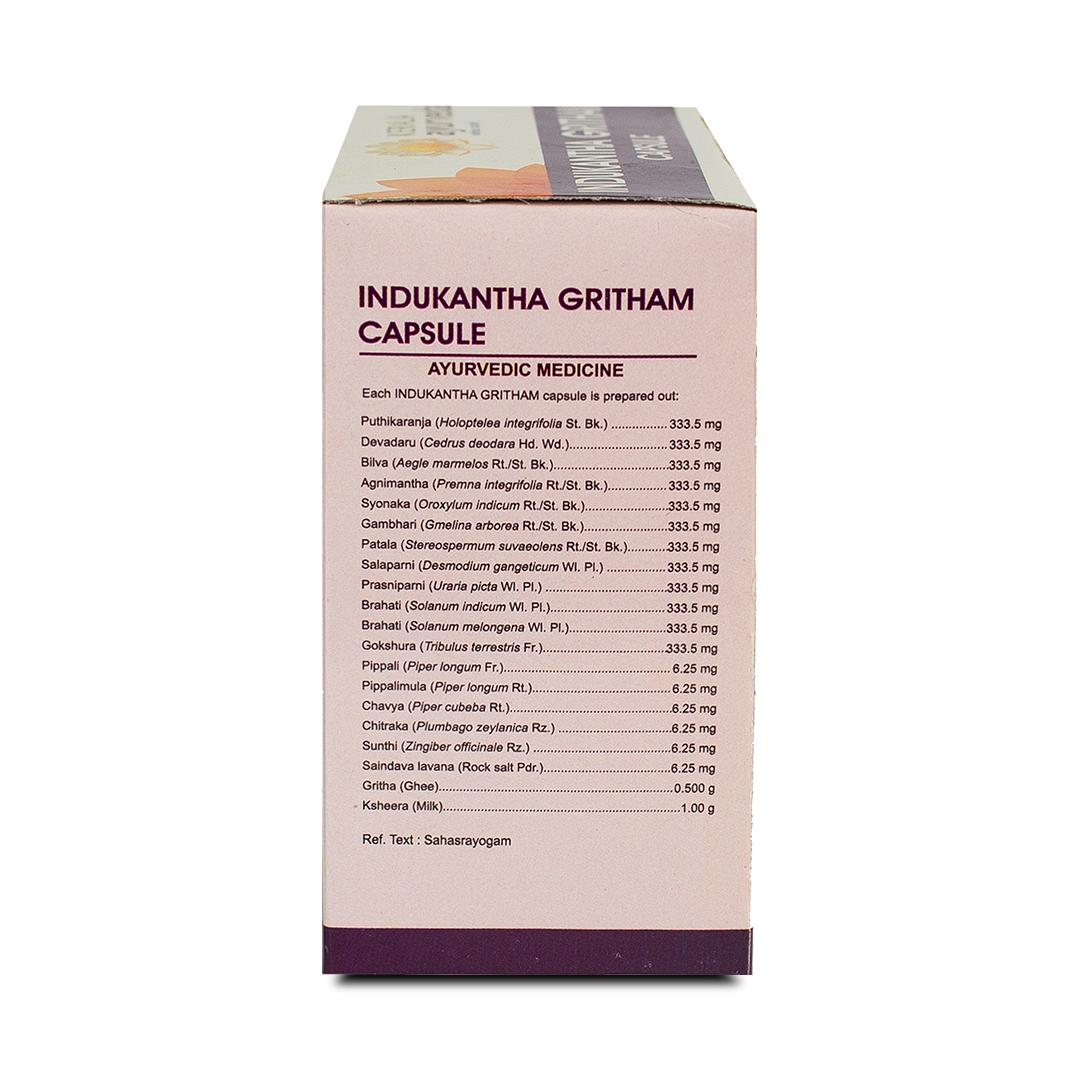 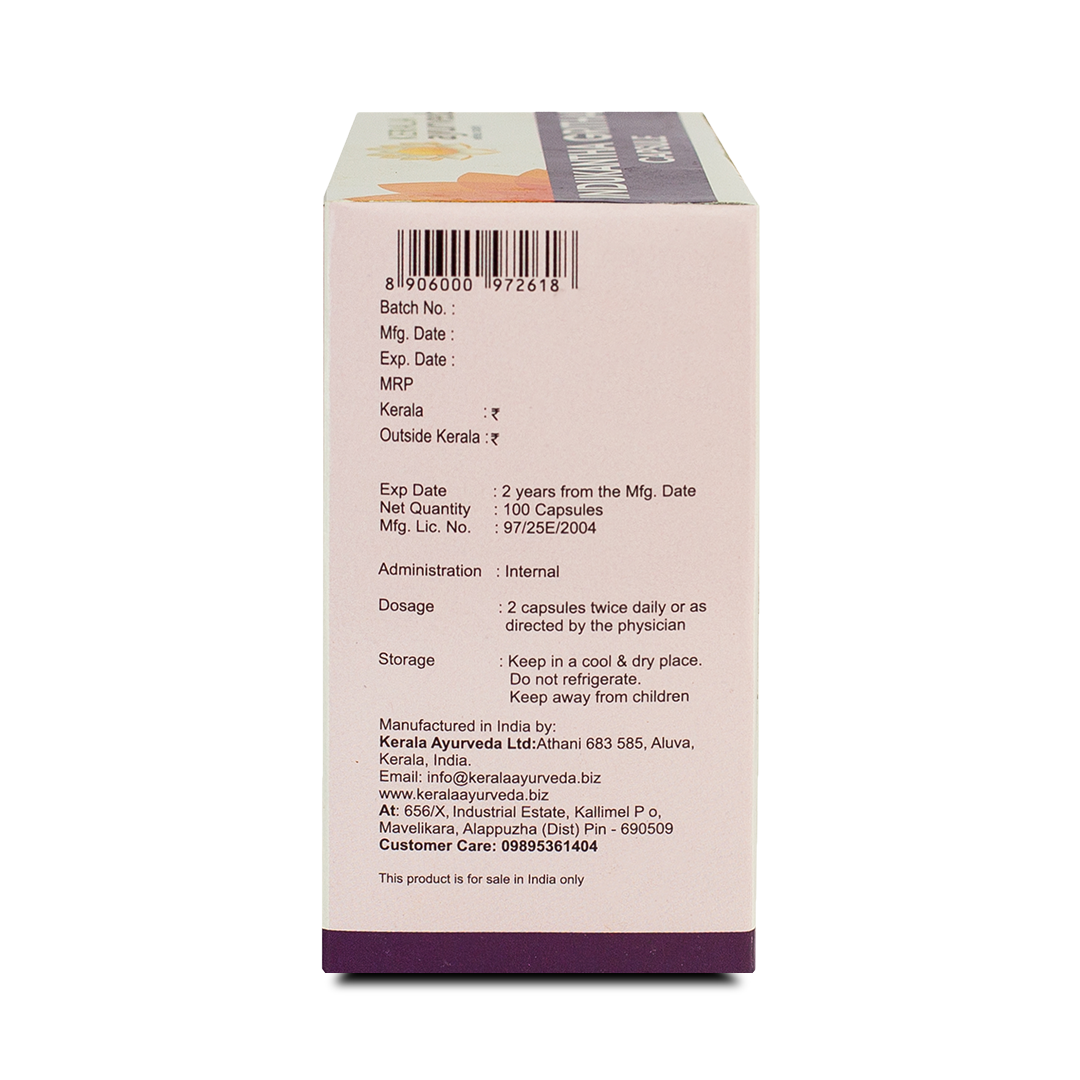 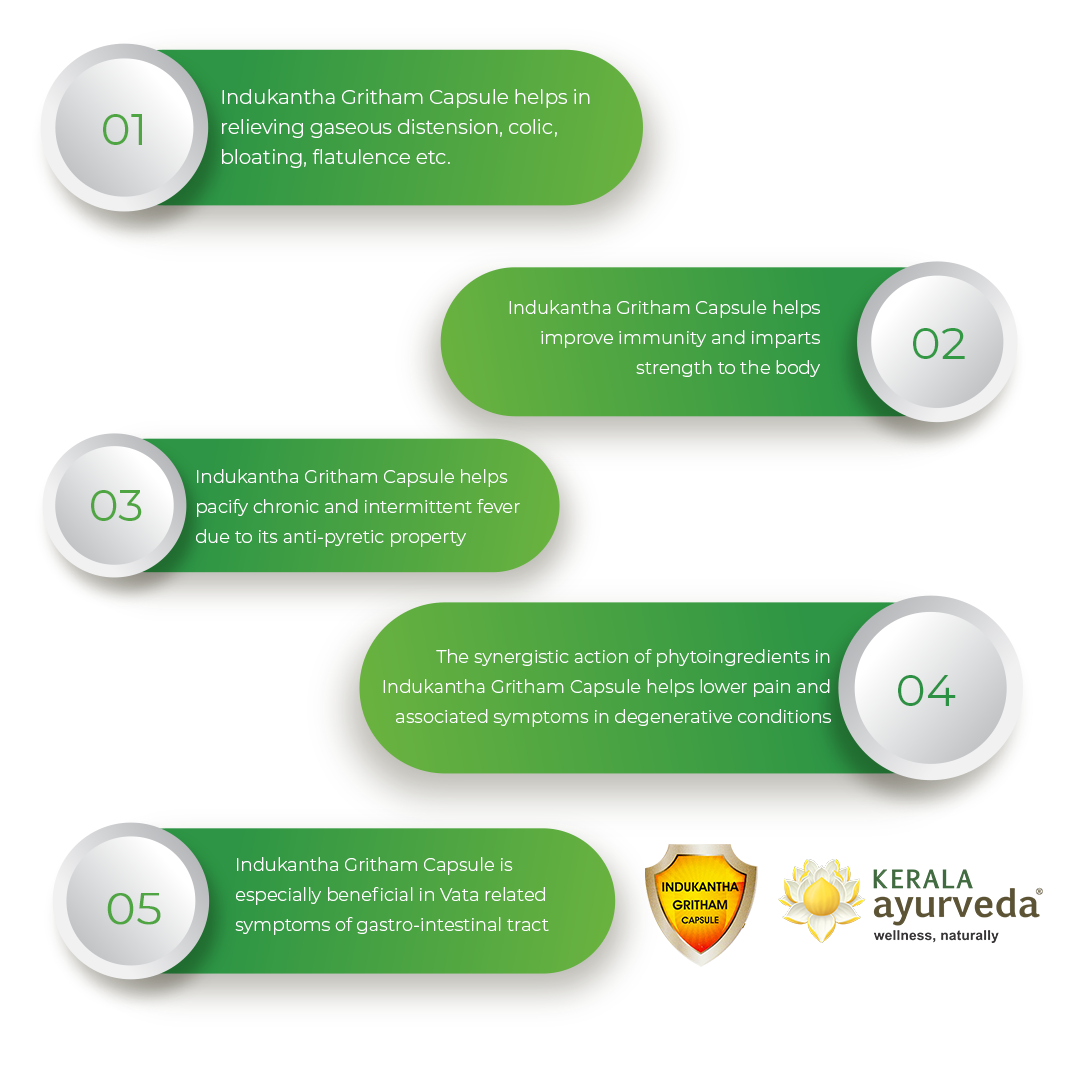 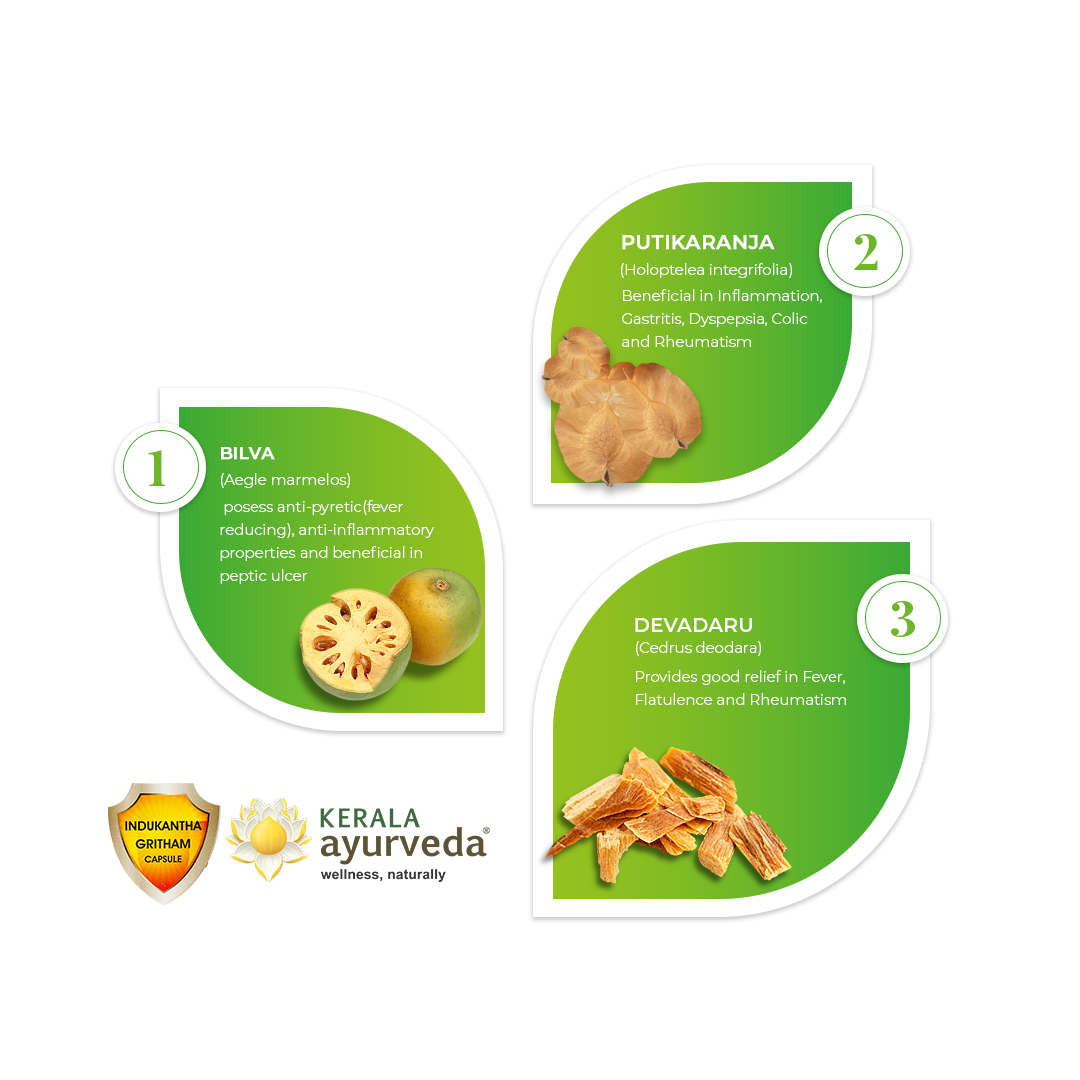 Indukanta Ghritam is an Ayurvedic formulation available in the form of medicated ghee and as a capsule. In Sanskrit Indu means ‘Moon’ and Kanta’ means ‘Lustre’, thus Indukanta means glow and lustre of the Moon. This medically treated capsule helps to  correct metabolism and is found to be helpful in establishing lost immunity. This immunity boosting ayurvedic medicine is also one of the prescriptions to help heal individuals from chronic fevers and many other conditions.

This is a medicated ghee containing Dashmula and many other medicinal herbs and indicated in the treatment of weakness, chronic fever, vata roga, tuberculosis and peptic ulcer. It is a useful medicine for improving appetite, digestion and curing abdominal diseases. It is prescribed to be an excellent remedy for treating cough in old age. Since it is a ghee based medicine, it increases strength and immunity of the body.

Indukantha Gritham is a formulation referred to in the text of Sahasrayogam in the context of Gritha yogam. It is a potent formulation which helps to enhance immunity with special indication in respiratory disorders and recurring fevers. Antioxidants play a significant role in improving the immunity and thereby in combating these conditions.

Indukantha Gritham capsules are a poly herbal medicated ghee preparation containing  an ideal combination of herbs, such as Putikaranja, Devadaru, Dasamoola, Trikatu, Chitraka and Saindhava which are said to nourish the mucosa of GIT and provide immunity, strength and resistance to the body.  This Ayurvedic medicine for fever  retains all the actives of the classical Indukantha Ghritham in capsule form and is classically one of the prescriptions to treat fever and other abdominal disorders. It also helps to relieve bloating, abdominal distention, and loss of appetite.

Indukantha Ghritham capsule retains all the actives of the classical Indukantha Ghritham but in the capsule form, ie. it is known to work well as an immunomodulator, anti-pyretic, anti-ulcerogenic, and also as a digestive and laxative.

Indukantha Gritham Capsule is especially beneficial in vata related symptoms of gastro-intestinal tract and is main prescribed as one of the treatments when dealing with:

Fevers although common can be unpleasant. Fever is a temporary increase in your body temperature, often due to an illness. Having a fever is a sign that something out of the ordinary is going on in your body.

People's normal body temperatures may vary and are affected by factors such as eating, exercise, sleeping, and what time of the day it is. Our body temperature is usually at its highest at around 6 p.m. and at its lowest at about 3 a.m.

A high body temperature, or fever, is one of the ways our immune system attempts to combat an infection. Usually, the rise in body temperature helps the individual resolve an infection. However, sometimes it may rise too high, in which case, the fever can be serious and lead to complications

A fever can cause a person to feel very uncomfortable. Some signs and symptoms of a fever include the following:

Fevers generally go away within a few days. Most fever is beneficial, causes no problems, and helps the body fight off infections. The main reason to treat a fever is to increase comfort. Fever is the result of an immune response by your body to a foreign invader. Foreign invaders include viruses, bacteria, fungi, drugs, or other toxins.

A part of the brain called the hypothalamus controls body temperature, which usually varies throughout the day from the normal temperature of 98.6 F. In response to an infection, illness, or some other cause, the hypothalamus may reset the body to a higher temperature because fever is the immune system's response to a foreign invader. These foreign invaders include viruses, bacteria, fungi, drugs, or other toxins. They are considered fever-producing substances (called pyrogens), which trigger the body's immune response. Pyrogens signal the hypothalamus in the brain to increase the body temperature set point in order to help the body fight off the infection. Fever is a common symptom of most infections such as colds, flu, and gastroenteritis (also referred to as stomach flu), and thus a risk factor for fever is exposure to infectious agents.

Typical infections that may cause a fever include those of the ear, throat, lung, bladder, and kidney. Autoimmune disorders (including rheumatoid arthritis, lupus, and inflammatory bowel disease), medication side effects, seizures, blood clots, hormone disorders, cancers, and illicit drug use are also some non-infectious causes of fevers. Fever itself is not contagious; however, if the fever is caused by a viral or bacterial infection, the infection may be contagious.

According to Ayurveda, ‘Jwara’ or fever refers to the irregularities of body temperature. It is one of the most comprehensively described entities in Ayurveda. Ayurveda explains that the generator of the bodily temperature is located in the forehead.  In majority of the cases, there is reduced heat (agni) in the GIT (gastrointestinal tract) and an increased temperature in the external body. Fever might be a symptom of a disease or can be a disease in itself. Ayurvedic treatment of fever is based on reduction of aggravation pitta and reduces toxins in he body. According to Ayurveda, fever happens because of an imbalance in the following doshas:

According to Ayurvedic science, there are thirteen types of fever:

So, depending upon the doshic involvement or other factors, additional symptoms besides elevation of temperature are observed.

In the world of ayurvedic medicine, fever is a very ordinary ailment and is often referred to as Pratishyaya. All the three doshas in ayurveda are responsible for the occasional occurrence of cold, which provides effective treatment in common fever.

According to Ayurveda, it is important to know how to eat properly when the digestive fire, or agni, is low. A lighter diet is recommended when one has a fever, flu, cold or diarrhea or when one is recuperating from an illness.