A significant breakthrough: Kerala Ayurveda is recently awarded a US Patent on metabolic disorders! 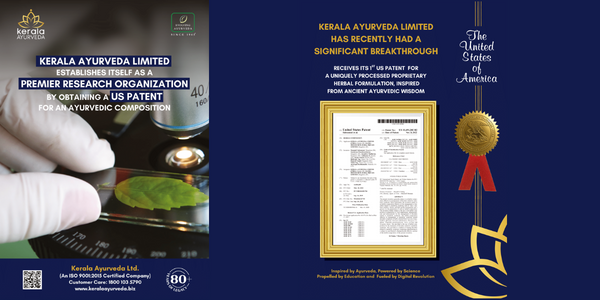 Kerala Ayurveda Limited (KAL) announced that it had received its first patent from The United States Patent and Trademark Office (USPTO) granted for a proprietary herbal formulation that is uniquely processed and inspired by ancient ayurvedic wisdom.

A statistical framework was conducted on the formulation using the rigors of modern scientific validation, including Phytochemical & Marker Analysis, extensive pre-clinical testing at Renovel Discoveries Inc. in the United States, and a pharma rigor double-blind placebo-controlled clinical study at the well-known Banaras Hindu University (BHU) in India. The patent also covers the efficacy of the herbal composition in the management of metabolic syndrome disorders such as type 2 diabetes mellitus, obesity, and lipid profile management, as well as its use in the preparation of food supplements, pharmaceuticals, and nutraceuticals in appropriate dosage forms such as beverages/liquids, capsules, tablets, granules, jellies, to mention a few.

Dr. Jayarajan Kodikannath, CEO of Kerala Ayurveda USA, said, "With a perfect profile demonstrated by our team, this milestone will now allow Kerala Ayurveda to play a significant role in the global Ayurvedic. This patent supports our commitment to treat diseases driven by managing metabolic syndrome disorders such as type 2 diabetes mellitus, obesity, and lipid profile management. Ayurveda is on the cusp of making a mega movement as its sister science, yoga, became mainstream in the west."

He adds, “There is a massive shift in the human psyche from the chemical-oriented and reductive approach to natural holistic consciousness-based living. We see that Post COVID, this shift to a more natural preventative and self-care approach, became much more relevant. Kerala Ayurveda Academy USA has been focusing on creating confident and capable Ayurvedic professionals across the globe to serve the communities through providing authentic teachings of Kerala’s traditional practices.”

Ramesh Vangal, Chairman of Kerala Ayurveda Limited, said, "Kerala Ayurveda has a sweeping global vision for Ayurveda. To do this, we have had to establish international scientific validation of our safe, pure, and effective products. Our recent acquisition of a US patent on metabolic disorders for Kerala Ayurveda is a significant breakthrough. Together with our large vocational institution in the United States, its 3000 practitioners, and 200 products specially made for the USA, we will spearhead a global movement. Our range of high-quality products meets California Prop 65 standards (CA Prop 65) which are the most stringent in the world. "

With this invention, KAL's main goal was to establish Safety, Purity, and Efficacy, as well as to provide a standardised process for preparing such a herbal composition, resulting in a standardized product with specifications that could indicate batch-to-batch consistency (in terms of particular specific active ingredient composition that are unique to the herbal blend and are believed to contribute to the efficacy of the formulations so prepared and developed).