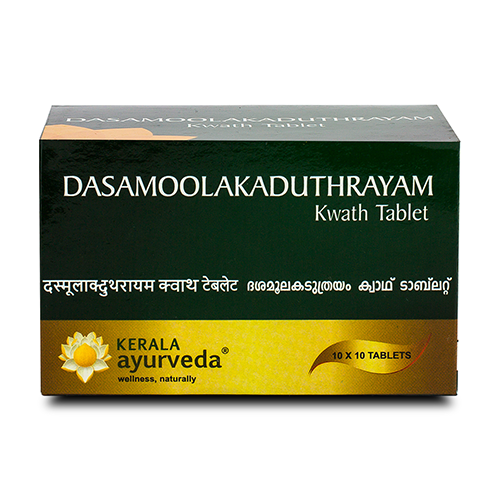 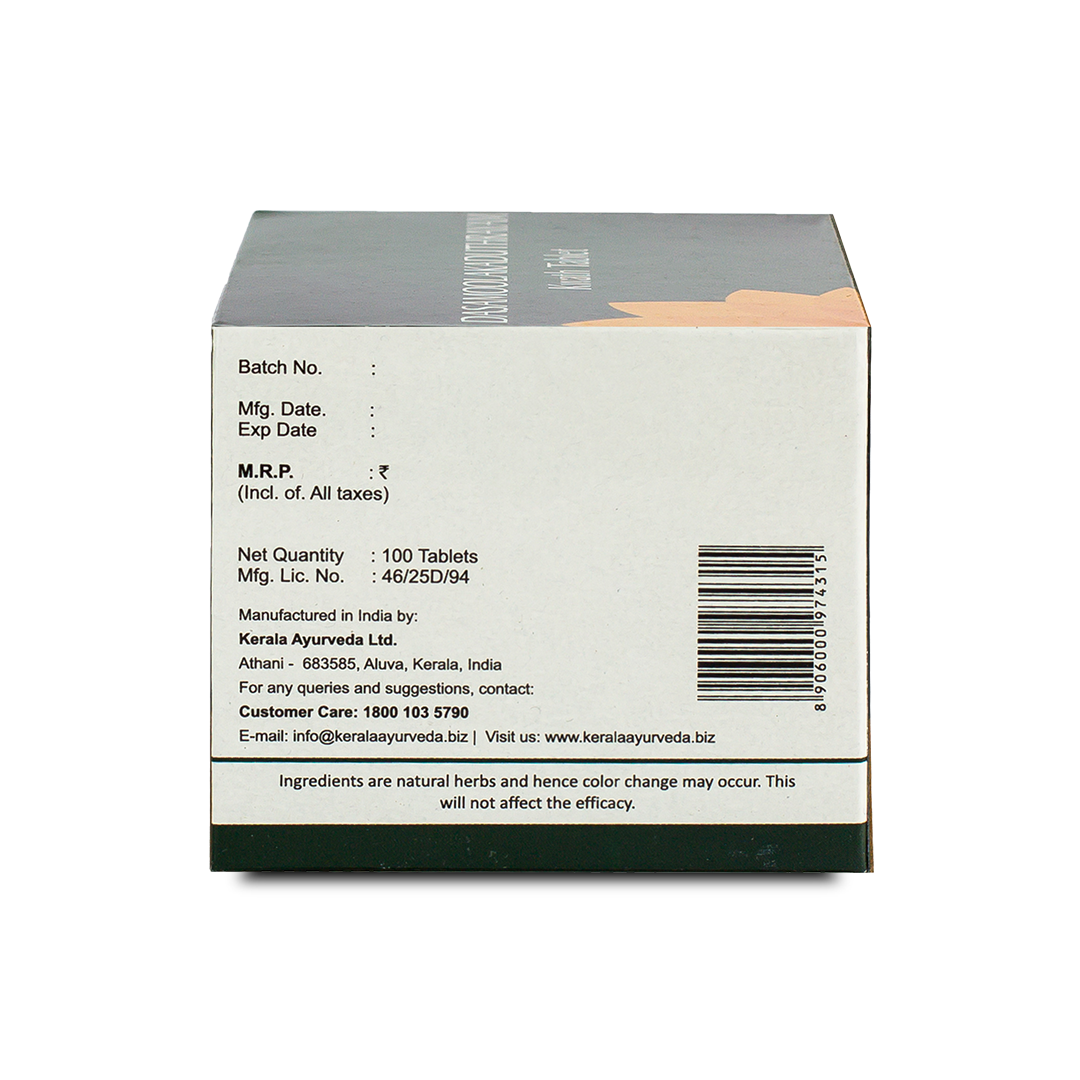 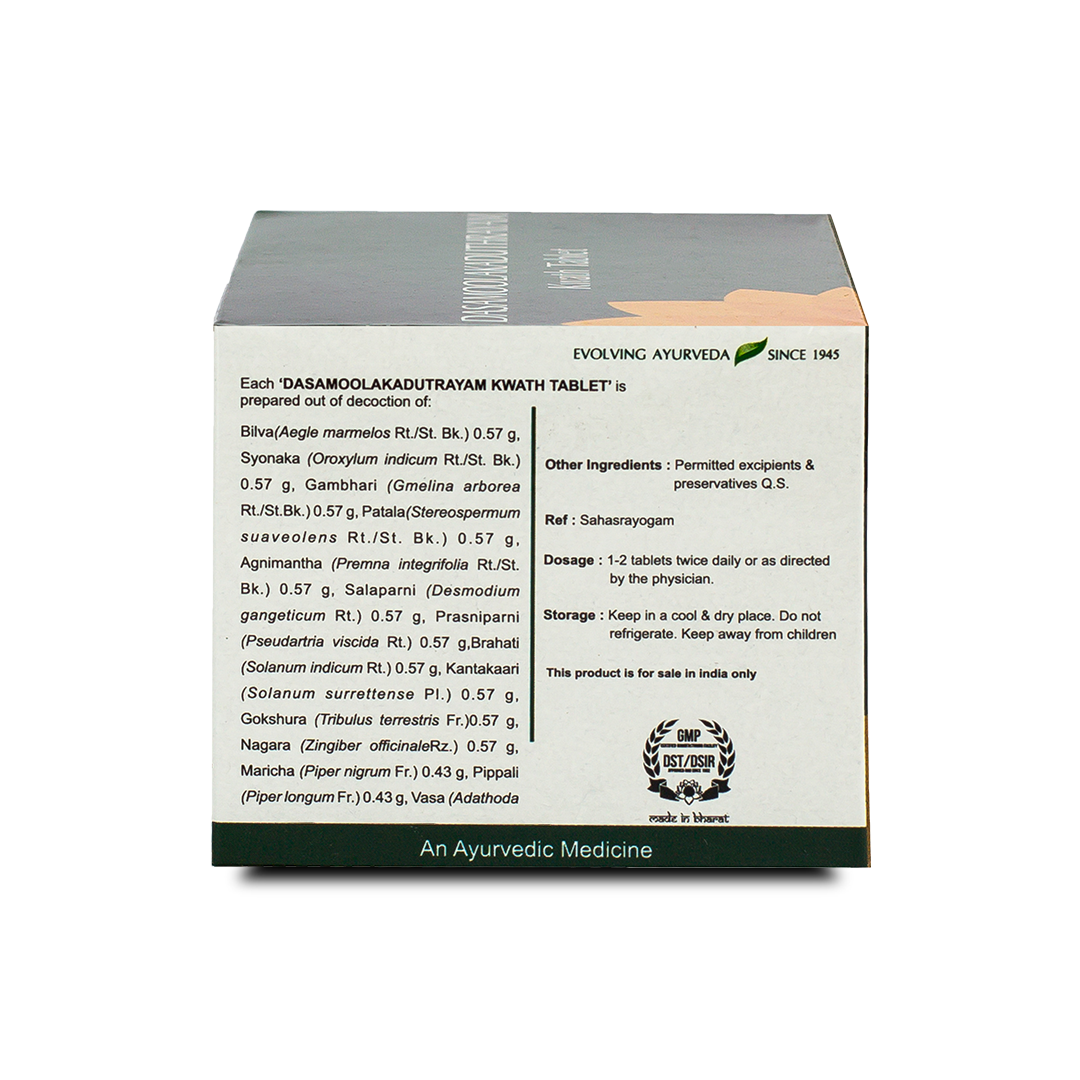 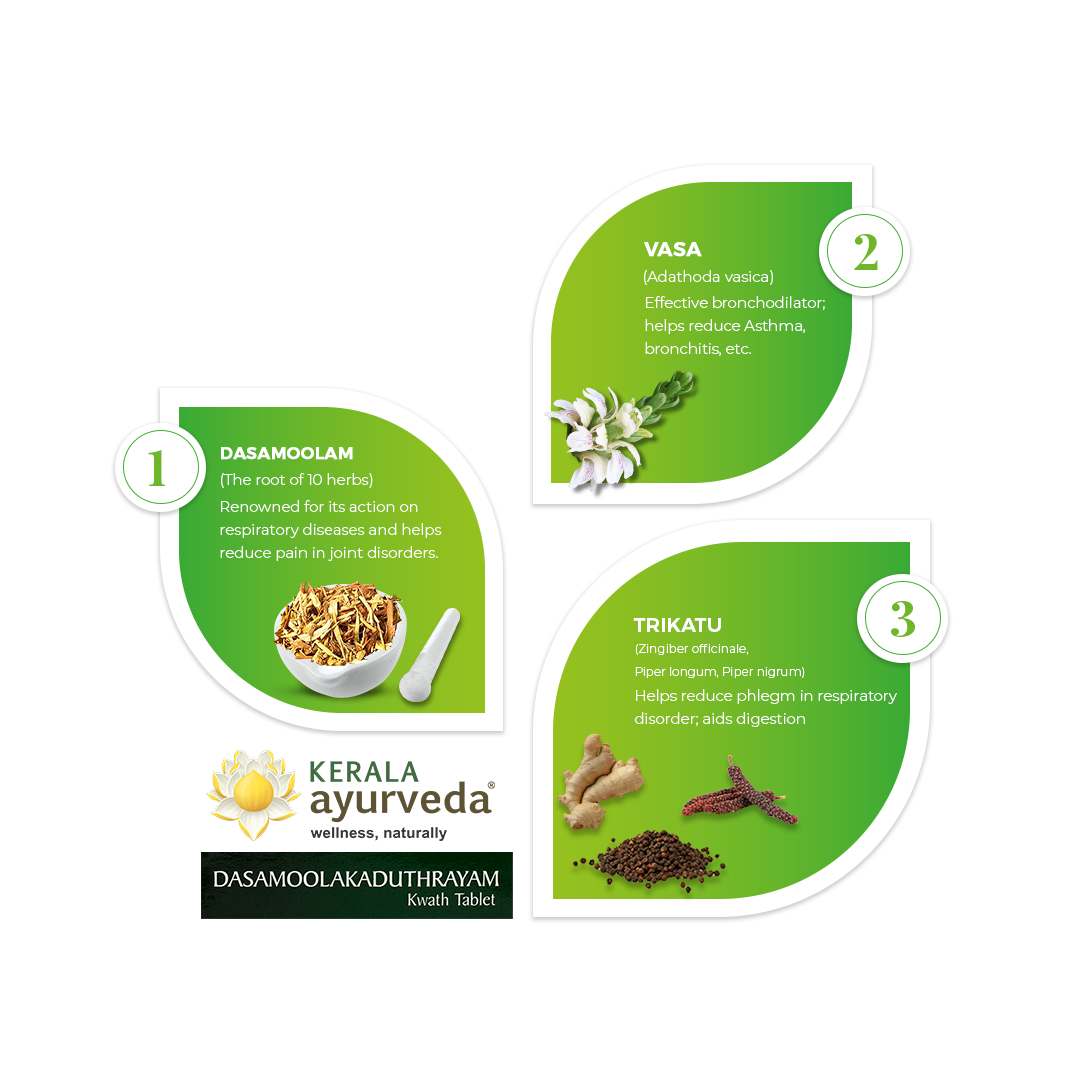 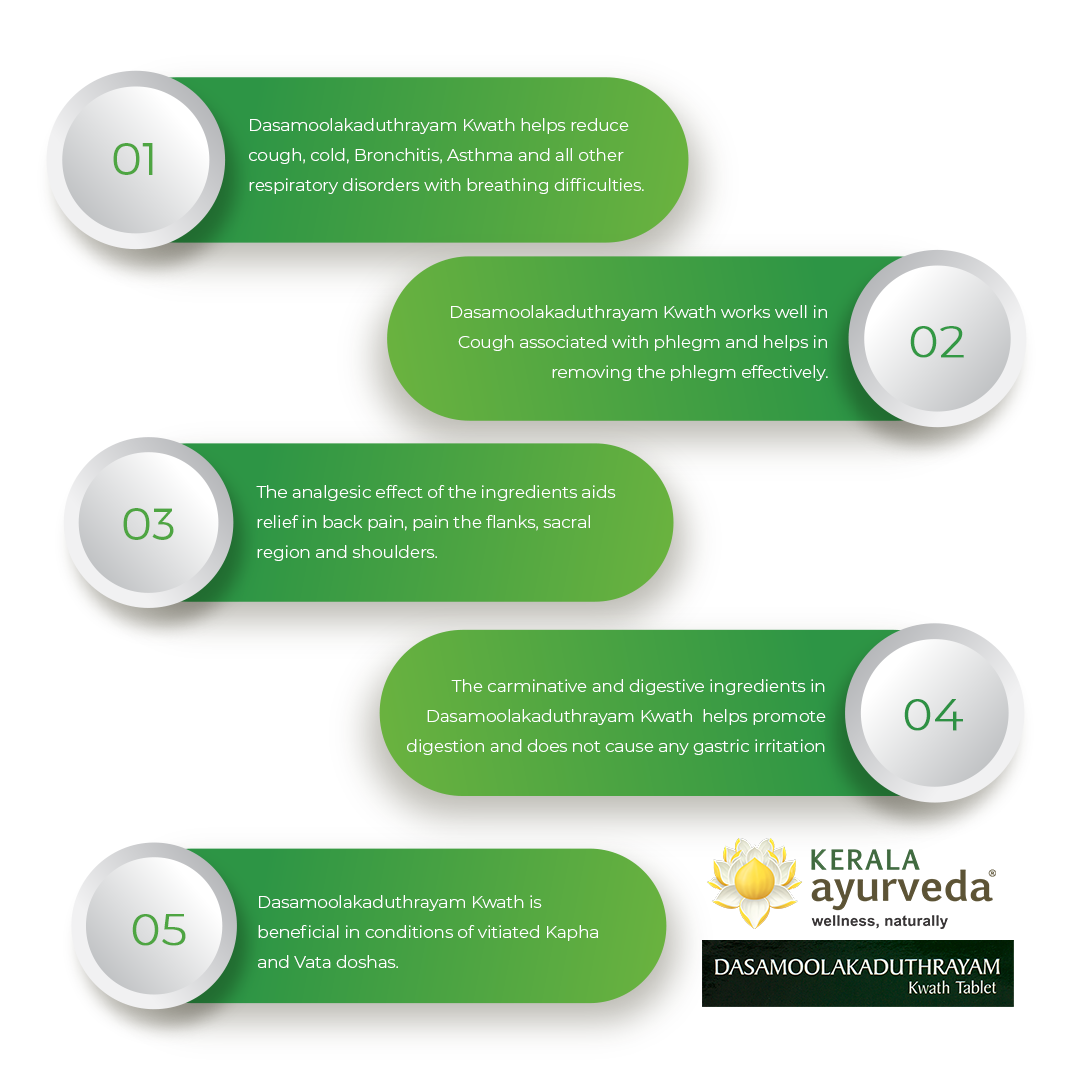 Dasamoolakaduthrayam Kwath Tablet is a form of the Dasamoolakaduthrayam Kashayam. This kashayam is known to be widely used in the Ayurvedic treatment for cough and cold. In the tablet form, this medicine retains its original efficacy but is more convenient to store and use.

The Dasamoolakaduthrayam Kwath Tablet for cold and cough contains several key ingredients known to be helpful in treating respiratory disorders that cause productive coughs. These ingredients are known to be commonly used in ayurvedic medicine for cough and cold and productive cough treatment. Roots like Nagara also help support good digestion and helps find relief from flatulence.

The Dasamoolam are the ten (Dasa) very potent roots (Moolam) that are as follows:

Ayurveda classifies all respiratory problems under the label of  Swasa Roga. The two Doshas that are the primary cause of these problems are the Vata and Kapha Doshas. The Vata Dosha is cold, rough and dry and its imbalance can lead to respiratory problems. The  Kapha Dosha is cold, heavy and slimy and is the cause of the congestion that characterises productive cough. The imbalance of these Doshas begins in the digestive system, particularly in the Kledaka Kapha. This imbalance affects lungs and creates a respiratory problem. The congestion causes blocks and clogs the lungs resulting in bronchitis.

The antidote to this congestion is to increase the Pitta Dosha. This causes the reduction of the Kapha Dosha and results in the decongestion of the respiratory system and relief from the symptoms. Ayurvedic productive cough treatment aims to balance the Pitta and Kapha Doshas.

The sequence of events illustrates that as per Ayurveda the problems in the respiratory system originates from the digestive system. So, maintaining a good strong level of Agni or the digestive fire helps to treat this problem from the source. Medicine for cough and cold ensures that proper digestion and Agni are maintained. This also prevents the formation of the metabolic waste called Ama. Ayurveda also recommends a diet that is designed to bring the imbalanced Doshas back into proper balance.

Bronchial asthma is called Tamaka Swasa. It is triggered by excessive Kapha Dosha aggravating foods, allergens, physical trauma to the throat or chest, suppression of natural urges, cold climate, excessive exercise or sexual activity. One must avoid the activities that aggravate the cough and cold.

Asthmatic bronchitis is not merely a physical problem according to Ayurveda. Ayurveda has a holistic approach to human health. It defines the Koshas in a person as; the Anamaya Kosha (the physical body), Manomaya Kosha (the mind), Vijnanamaya Kosha (the psyche), Pranaymaya Kosha (the breath body), and the Anandamay Kosha (the bliss body).  When there is a balance between the five  Koshas, a person is in good health. Asthma is the result of a disturbance or imbalance in all the Koshas. This blocks the Prana causing the breathing difficulties of asthma. It can also be caused by psychological or emotional issues. Ayurveda looks at the state of mind and the emotional good health of the patient in order to treat asthma.

Cough or cold is the result of an infection or immune reaction to infection or irritation. The allergens or infection causing virus irritates the lining of the respiratory tract causing the formation of excess mucus formation, running nose and sneezing. A cough is a reflex reaction to expel irritants or foreign particles that are in the airway. The presence of mucus in the airways irritates the lining and the nerve endings in the lining of the airways and triggers this reflex cough. The mucus makes it a productive cough.

When there is an inflammation of the bronchial tubes due to a virus it causes bronchitis. Bacteria, fungi or viruses cause an infection in the lungs resulting in pneumonia. The symptoms of cough, cold and bronchitis are treated with decongestants, anti-inflammatories, cough suppressants and expectorants. Asthma is managed symptomatically with inhaled corticosteroids (ICS) to control inflammation,  long-acting bronchodilators (LABA) and anticholinergic agents or antimuscarinic agents.  Anti-inflammatory medicine, decongestants, cough suppressants and expectorants are used to treat colds and coughs.