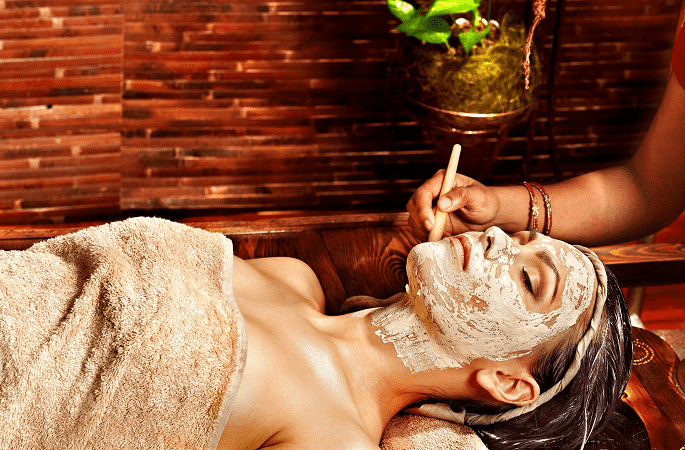 The use of facial masks and mud baths dates to antiquity when mud was credited with tremendous healing powers. The mystique and folklore of ‘wet earth’ treatments is incorporated into many currently available skin and hair care products. The warmth that results from their application is the stimulating sensation of a rejuvenated face. Epidermal debris and black heads are removed when the treatment is washed off the face or body. The user interprets this as invigorated skin and the result is usually a noticeably improved complexion.

Creams are emulsions consisting of two immiscible liquids, for example water and oil with one of this forming the dispersed phase and the other continuous medium. Creams are semisolids, the classic type of skin care cosmetics because of their wide range of stability. But there is no one all-purpose cream for the young and old. The effectiveness of a cream depends on the condition that it is meant to correct.

Collagen and elastin are proteins found in skin which gives strength and firmness to skin. Unfortunately as we age, collagen breaks down, free radicals attack the cells and the skin gets considerably damaged due to over exposure to the sun, pollution etc. Subsequently lines and wrinkles appear and skin begins to sag. The ideal skin revitalizer stimulates production of both collagen and elastin.

‘Swarnamukhi Face Cream’ (SFC) from Kerala Ayurveda is a poly herbal preparation mainly used to improve face complexion. It is an antioxidant, reduces wrinkles, fine lines and nourishes the skin with vitamins which accelerates the formation of new skin cells. It is prepared using the herbs which are mentioned in Caraka-samhitaa meant for improving the complexion (varnya). The materials and formulation discussed in this text are generally those that have been widely used in ayurvedic formulations for a long period of time and are still highly valued.

‘Swarnamukhi’ contains herbs which are rich in flavonoids and alkaloids that contribute the antioxidant and antibacterial property. Kanaka taila is one of the main ingredients of SFC, which is used as the dispersed phase and the raw materials used in the preparation of face cream are notable medicinal plant extracts designed for skin care products. The combined solvent action of water and oil can clean the skin surface very effectively. Cleansing is achieved without completely removing the skin’s natural lipid film. Natural antioxidants present in SFC improve micro-circulation in the skin and protects tissues against damage by free radicals, promotes a healthy tone and appearance and offers comprehensive protection of face. The R&D of Kerala Ayurveda Limited has evaluated and presented a paper at a national conference and the detailed narration is presented here. In the present study the ‘Swarnamukhi Face Cream’ (SFC) was studied for Physical parameters, phytochemical evaluation, antioxidant potential, microbial assay and clinical evaluation.

Ingredients used in the cream

6. Necessary excipients for preparing cream base. The entire formulation is standardized as per WHO parameters.

Standardization of herbal drugs is not an easy task as numerous factors influence the bio-efficacy and reproducible therapeutic effect. In order to obtain quality oriented herbal products, care should be taken right from the proper identification of plants, season and area of collection and their extraction and purification process and rationalizing the combination in case of polyherbal drugs.

This evaluation procedure provides the simplest and quickest means to establish the identity and purity and thereby ensure quality of a particular sample. If it is found to be devoid of or significantly different from the specified sensory characters like color, consistency, odor etc., it is considered as not fulfilling the requirements.

The application and acceptance of pharmaceuticals and cosmetics are also dependent on the rheological properties of the final product like viscosity and spread-ability. Therefore,
rheological measurements can assist scientists in both formulating the optimal pharmaceutical and cosmetic products and improving processing efficiency. Quality attributes such as color and consistency are extremely important to the acceptance of semisolid products by the end-user or consumer.

Phytochemical methods are applied in routine herbal medicine standardization as well as modern drug discovery researches. In a narrower sense the terms are often used to describe the large number of secondary metabolic compounds found in plants.

Many of these are known to provide protection against insect attacks and plant diseases. They also exhibit a number of protective functions. It is important to use the phytochemical methods to screen and analyze bio-active components, not only for the quality control of crude drugs, but also for the elucidation of their therapeutic mechanisms.

Plant flavonoids are powerful antioxidants and free radicaln scavengers for the protection of skin.

TLC is considered basically for qualitative identification, separation and preparation of organic compounds that are in the cream. TLC was done to visualize the presence of actives in the formulation. Methanolic extract of the powdered drug was used for the TLC analysis.

Herbal ingredients of high quality should be free from insects, animal matter and excreta. It is usually not possible to remove all contaminants completely. Hence specifications should be set in order to limit them. Aerobic bacteria and fungi are normally present in plant material and may increase due to faulty growing, harvesting, storage or processing. Herbal ingredients, particularly those with high starch content, may be prone to increased microbial growth. Pathogenic organisms including Enterobacter, Enterococcus, Clostridium, Pseudomonas, Shigella and Streptococcus have been shown to contaminate herbal ingredients.
The microbial standards were determined as per the WHO norms.
1) Total Bacterial count
2) Total Yeast and mold count
3) Detection of specific organism

Antibacterial Activity of The Formulation

Secondary bacterial infection in skin lesions is a common problem. Many wound and skin infections that complicate skin lesions are caused by mixed bacterial flora. Aerobic and anaerobic, gram-negative and gram-positive organisms, whose origins are the endogenous oral, gastro-intestinal and skin flora may be present in such infections, where they exist synergically. Staphylococci (‘staph’) are a common type of bacteria that live on the skin and mucous membranes (eg. in nose) of humans. Staphylococcus aureus is the most important of these bacteria in human diseases. About 15-40 per cent of healthy humans are carriers of S. aureus, that is, they have the bacteria on their skin without any active infection or disease (colonization). Despite being harmless in most individuals, S. aureus is capable of causing various infections of the skin and other organs. S. aureus infections are common in people with frequent skin injury, particularly if the skin is dry. Staphylococci are becoming increasingly resistant to many commonly used antibiotics including penicillins, macrolides such as erythromycin, tetracyclines and aminoglycosides.
SFC was evaluated for antimicrobial activity against Staphylococcus aureus and Bacillus subtilis. For the study standard (pure) Microbial Type Culture Collection (MTCC) microbial strains were procured from Institute of Microbial Technology (IMTECH), Chandigarh.

Agar well diffusion assay was used for the determination of antibacterial activity. 18hrs incubated bacterial cultures were swabbed evenly on the Mueller Hinton agar plates using sterile swabs. Wells (0.7cm diameter) were made in the agar using sterile cork borer. Around 150μl of water extract of the formulation was added to the well using micropipette and sterile tips. Gentamycin (10mcg/dsc) was placed as the positive control. The plates were undisturbed for 2hrs for proper diffusion of the extract. Then the plates were incubated at 37C for 24hrs. After 24hrs, the zone of inhibition was checked by using Hi media Zone size checking scale and compared the result with Gentamycin zone. The method was repeated twice and the average zone size was calculated.

The tested bacterial strains were multi drug resistant (MDR) in nature. From the results it indicates that ‘Swarnamukhi Face Cream’ works as a potent anti bacterial agent against pimples-causing bacteria and other secondary bacterial skin infections.

Antioxidant activity of the Formulation

Antioxidants are used in cosmetics on the skin surface to eliminate or at least to minimize the undesirable reactions resulting from oxidation. The biological constituents from the raw materials acts as antioxidant for this face cream. For broad spectrum antioxidant activity DPPH assay was used for the evaluation.

To ascertain the efficacy of the formulation SFC, our R&D has collected a clinical data also through ‘Kerala Ayurveda Clinics’. An adequate and well-controlled Clinical evaluation was conducted involving a total of 32 evaluable patients treated with ‘Swarnamukhi’ on the face for 24 weeks with a comprehensive skin care and sun avoidance program, to assess the effects on fine and coarse wrinkling, milled hyper pigmentation, tactile skin roughness, and laxity. Patients were evaluated at baseline on a 10 unit scale and ‘quality of life’ questionnaire. The efficacy is evaluated based on the changes from that of baseline rating were categorized as:

Finally patient’s self assessment is made. The clinical evaluation of the cream was conducted on volunteers and the inference observed are mentioned The clinical evaluation showed that, 80% of the patients had good to moderate improvement. Reductions of wrinkles, hyper pigmentation, tactile roughness, laxity were 49%, 67%, 74% and 34% respectively. Using PSAS (Patients self assessment score) after 24 weeks of SFC application showed 83% of patient had good improvement, 15% remained same and 2% were found to be less apparent. The data showed that SFC can be effectively used against wrinkles, hyper pigmentation and roughness of the skin.

Physical and rheological parameters like color, odor, consistency, viscosity and spreadability of the poly herbal formulation has been standardized. Qualitative analysis showed the presence of flavonoids and alkaloid in the formulation and Quantitative analysis revealed the quantity of the same in the face cream. Microbial analysis showed that all the tested parameters were found to be within the limit.

Antibacterial activity of the formulation revealed that the tested Gram positive bacterial strains Staphylococcus aureus and Bacillus subtilis were found to be sensitive to the ‘Swarnamukhi’ water extract. Antioxidant studies showed that the formulation has reasonable antioxidant activity when compared to the standard ascorbic acid. The study provided adequate demonstration of efficacy for mitigation of facial fine and coarse wrinkling, mild hyper pigmentation, tactile skin roughness, and laxity.

There was significant reduction in wrinkles, hyper pigmentation and roughness by using the ‘Swarnamukhi’ cream. Since it is prepared by using an ayurvedic classical formulation Kanaka taila which is used for centuries, the cream has excellent potential.